Qualities that Allah Loves. Allah has created men with love and is closer to us than our jugular veins. The blessings that we enjoy in our daily lives are the gift from Allah SWT and the breath that we are taking for granted is also given to us by His will. He puts us in trials and tribulations but never abandons us.

He waits for our cry for help and dua as He loves to hear His creations’ prayers. The amount of love He has for His creations is unmeasurable.

Steps to Get Closer to Allah 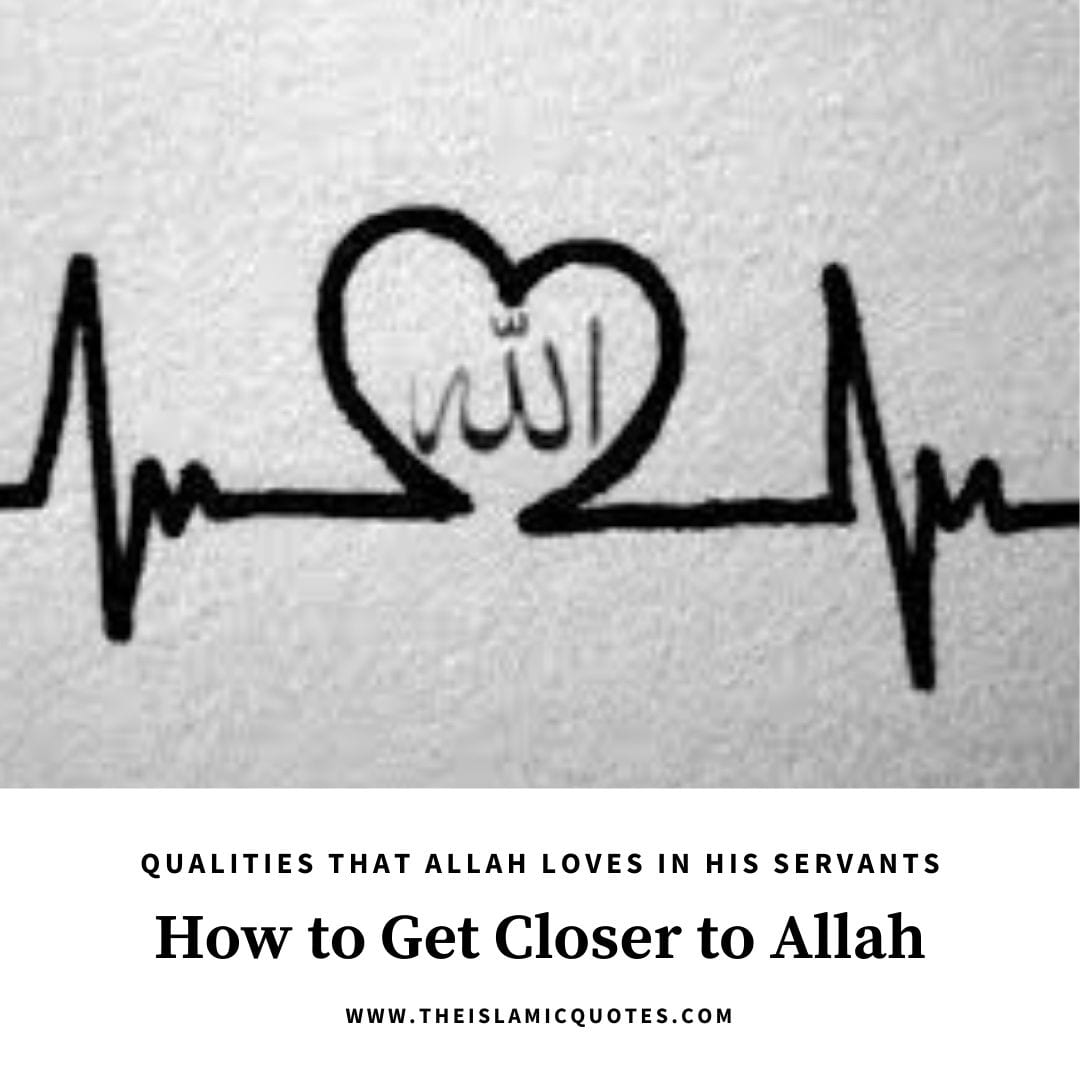 A true believer is always in control of his emotions, especially anger. We have already talked about Islamic Quotes About Anger and Anger Management but here are some of the most beautiful Ahadith on this topic: 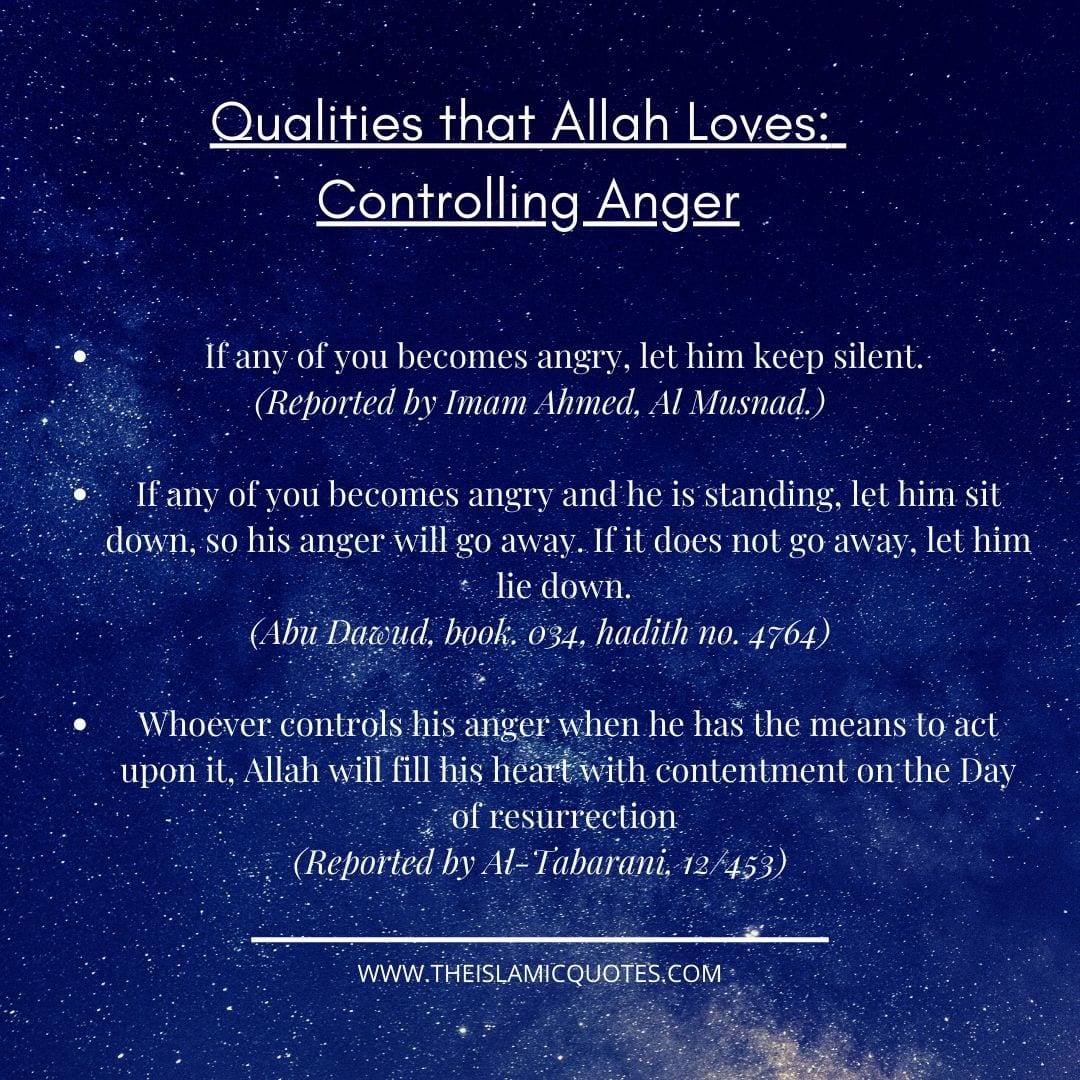 Patience is another virtue that has been spoken of most highly in both the Quran and Hadith which makes it evident that Allah loves the patient servants. We are all blessed differently, everyone has different blessings to enjoy and everyone has different challenges that they face. So as good Muslims, it is our duty to be thankful to Allah in the good times and be patient in the testing times. 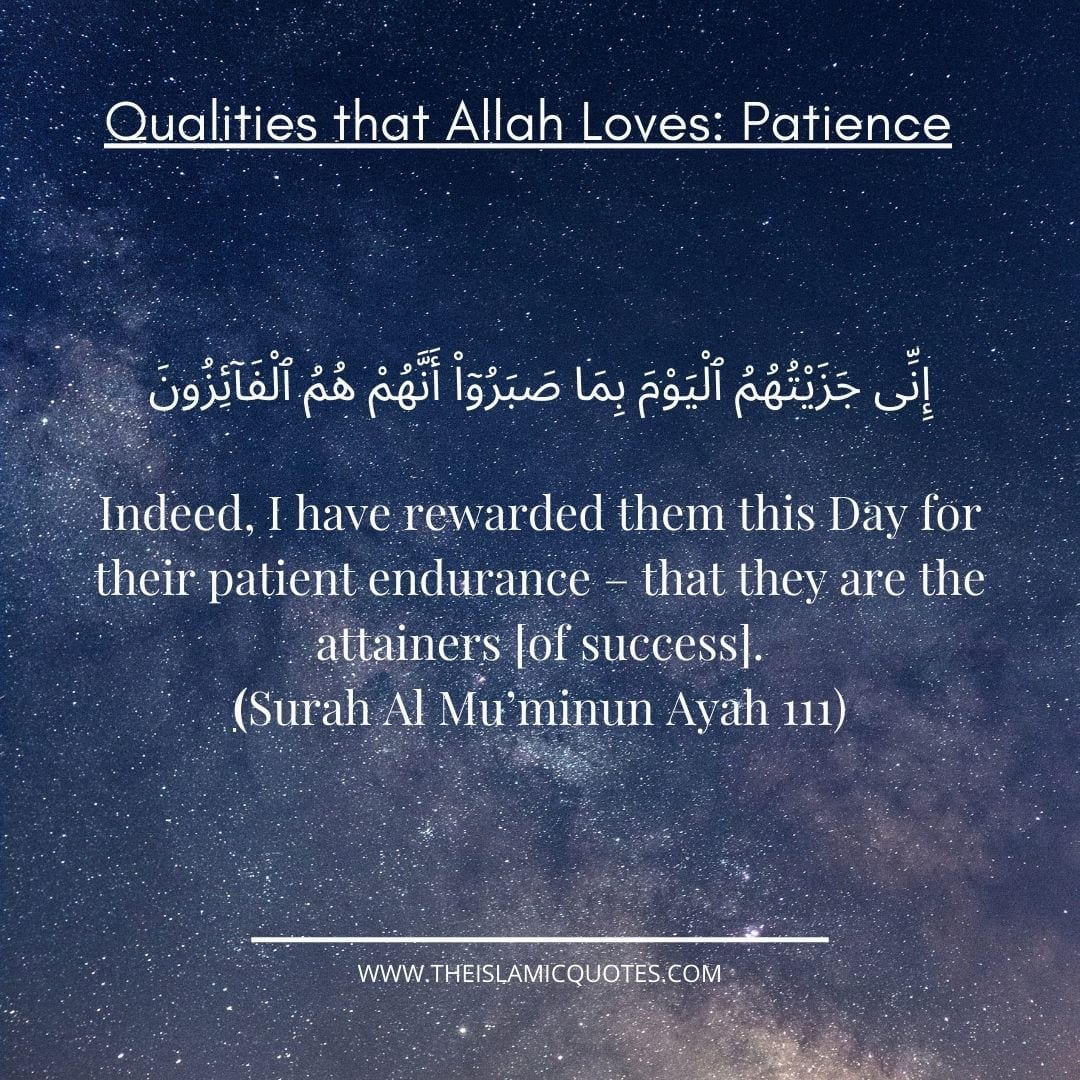 ↓ 8 – Having a Sense of Tahara/Cleanliness

Taharat or purification in Islam has been given great importance. Purification is of two kinds; Spiritual and Physical.

Physical Purification: Physical purification refers to physical cleanliness. A person cannot pray if he’s physically not paak or clean due to any Najs( Impurity). One has to perform ablution or Ghusl to pray and perform day to day duties. It is stated in a hadith that one who doesn’t keep himself away from urinary uncleanness, would be punished in his grave. Prophet Muhammad had declared cleanliness half of faith.

Spiritual Purification: Cleaning one’s heart from sins, negative emotions, and worldly desires are known as spiritual purification. Freeing our hearts with arrogance, hatred, jealousy, envy with the help of Salah and charity, leads us to the path of Allah SWT as such emotions corrupt our souls. Allah in the Holy says

He has succeeded who purifies himself, who remembers the name of his Lord and prays.” (Qur’an, 87:14-15)

Allah in the Quran mentions that He loves those who purify themselves from any sort of Impurity, be it physical or spiritual. 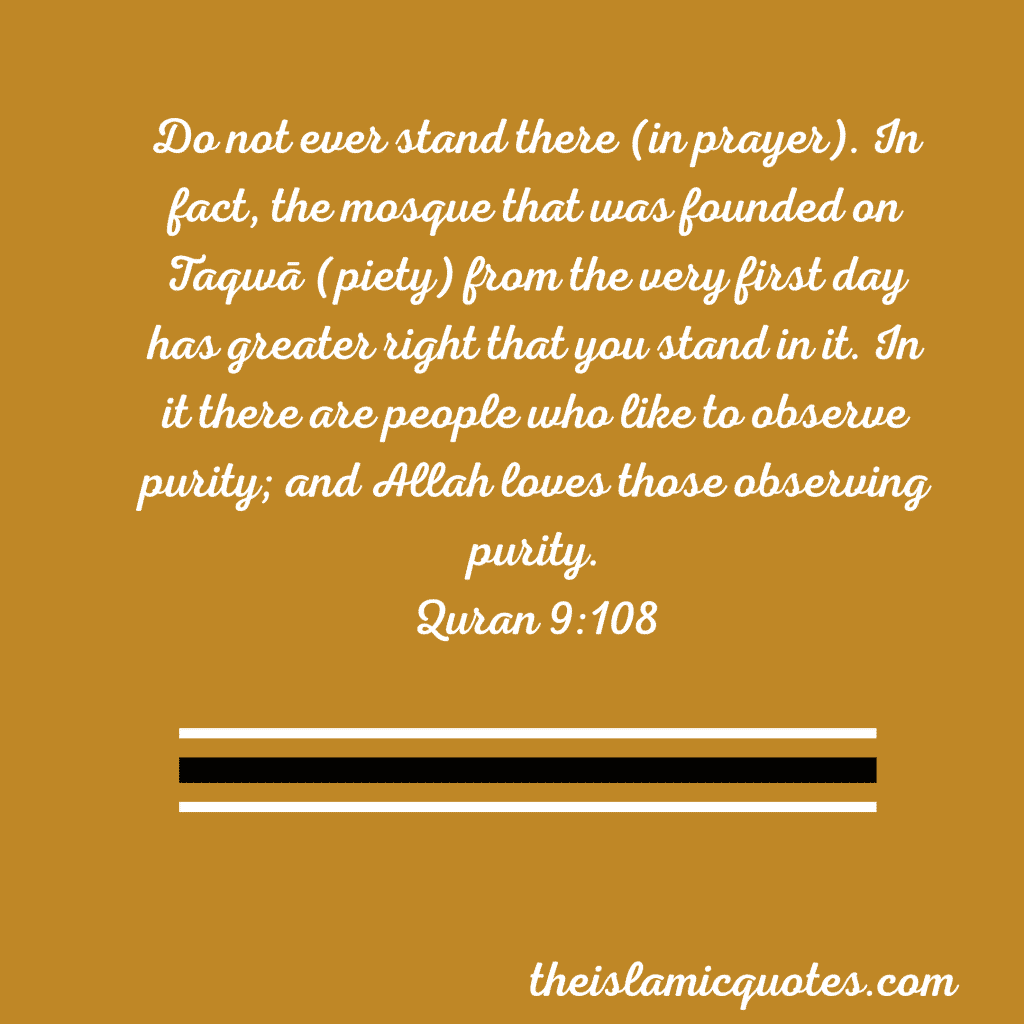 ↓ 7 – Allah loves those who repent

Allah loves when his people repent for their sins as we discussed in our previous article, Powerful Duas to Ask Allah for Forgiveness of Sins. 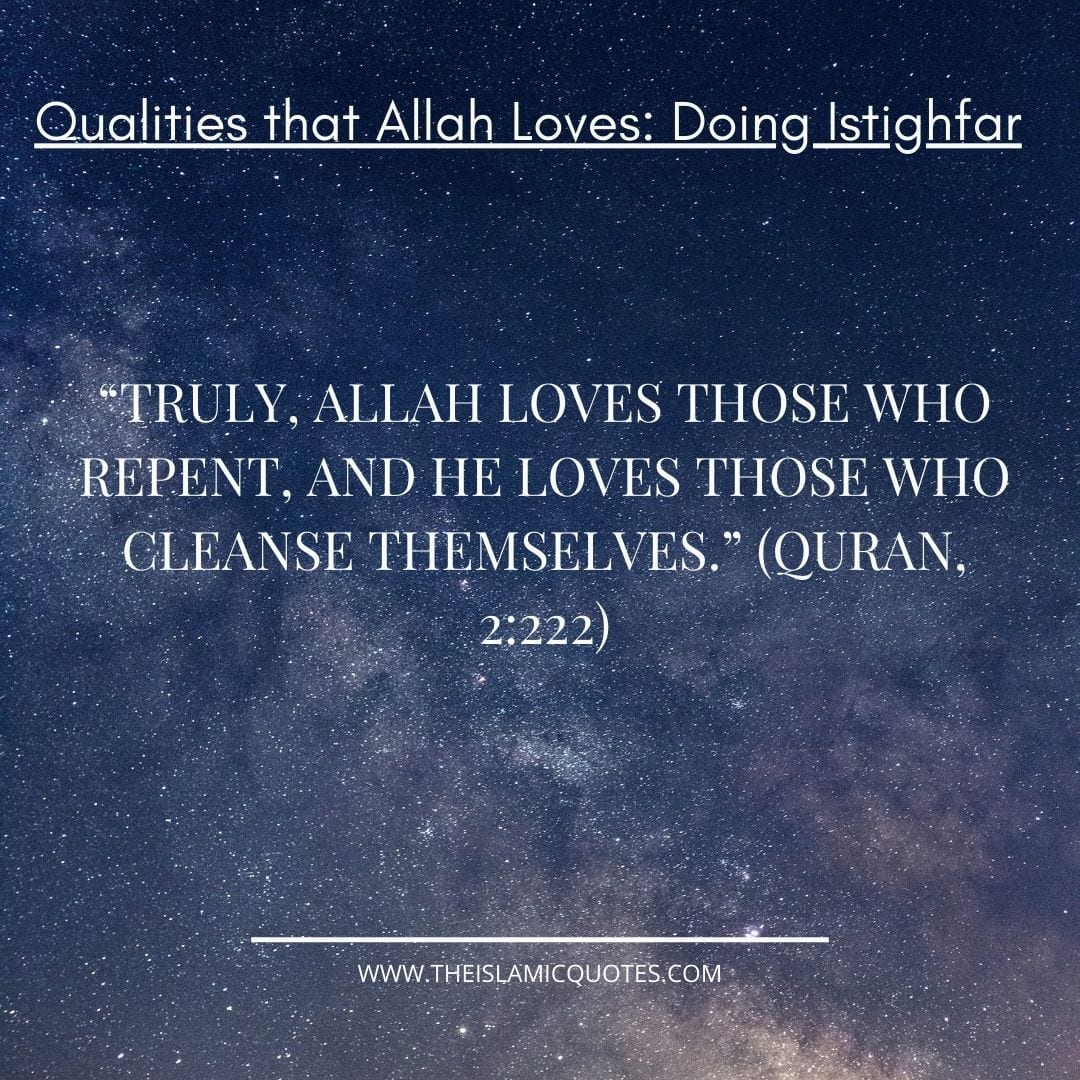 Repentance or Tawbah in Islam is known to ask for Allah’s mercy and forgiveness. If a person strays from the right path, commits a sin, and feels guilty, then he must look for the door of Allah’s forgiveness which can be reached through repentance, no matter how big the sin is. Allah loves the tears that are shed by a person who seeks Allah’s forgiveness due to the guilt that he feels for Allah’s disobedience. As long as the believers ask for forgiveness, Allah SWT will keep forgiving His slaves as He loves those who return to him with a heart sincere and clean after tawbah. 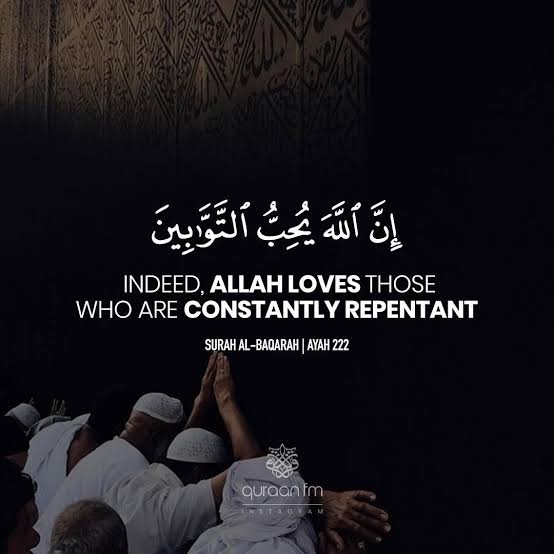 Reliance on Allah, Tawakkal, is the ultimate answer to all our problems and hardships. Tawakkal is having faith in Allah’s plans and submitting to His will at all cost no matter what the circumstances are, He alone is sufficient for us. Hazrart Ibrahim(AS) was thrown in the fire, His tawwakal saved him from the fire as his heart knew that only Allah is sufficient for him.  His tongue kept repeating ‘حَسْبُنَا اللَّهُ وَنِعْمَ الْوَكِيلُ – Allah (Alone) is sufficient for us, and, He is the Best Disposer of affairs.’

The realization of the help of Allah SWT is what makes our heart content after entrusting our affairs to Him.  Allah in the Quran announces His love for those who rely on Him alone. 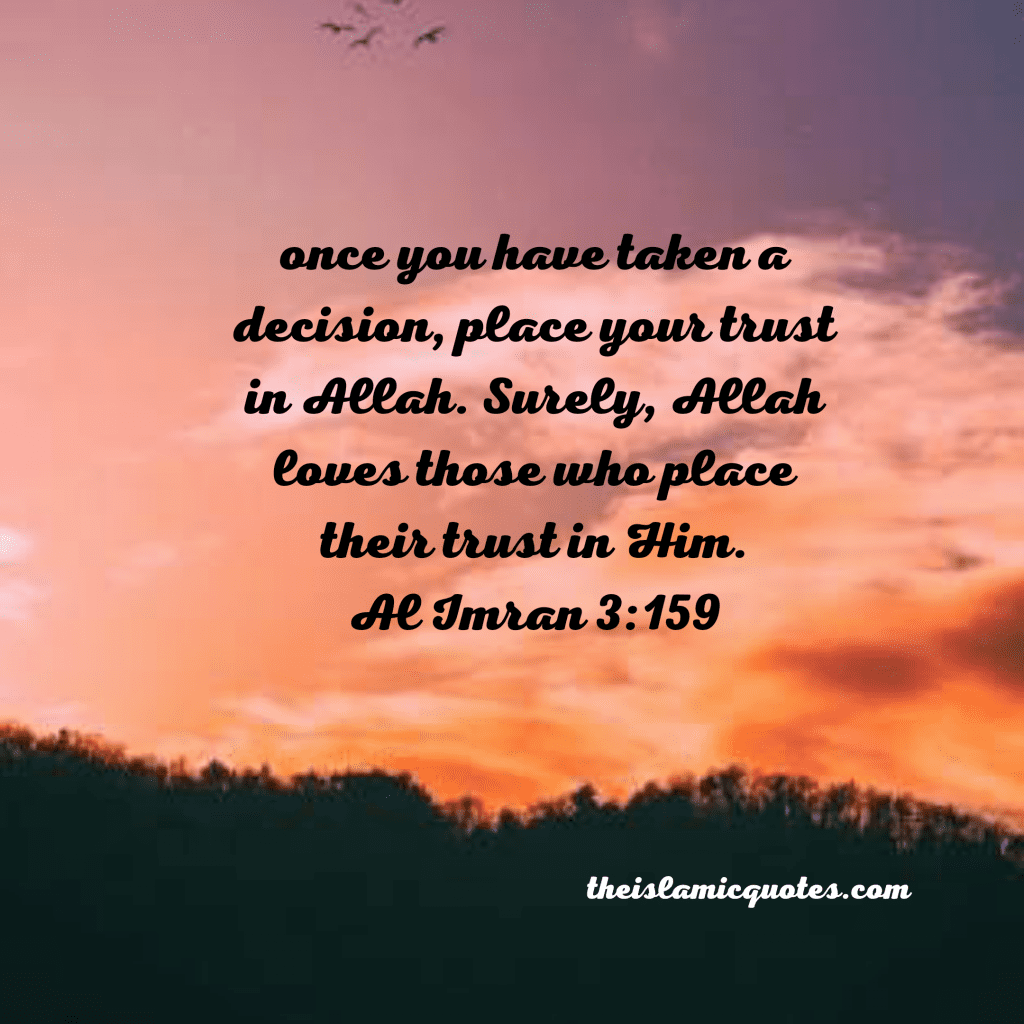 Justice in Islam is one of the greatest virtues. To lead with justice and practicing equality is encouraged by Allah SWT. Every matter and every aspect of life shall be dealt with justly as a just person is loved by Allah.

Injustice has no place in our religion and inequality is looked down upon regardless of race, religion, or gender. Everybody is equal in the eyes of Allah SWT and He asks His creation to make justice among people.

Allah in the Holy Quran says

We sent Our Messengers with clear signs and sent down with them the Book and the Measure to establish justice among the people…” (Quran 57:25)

To learn more about this, I recommend that you go through these Inspirational Islamic Quotes on Justice. 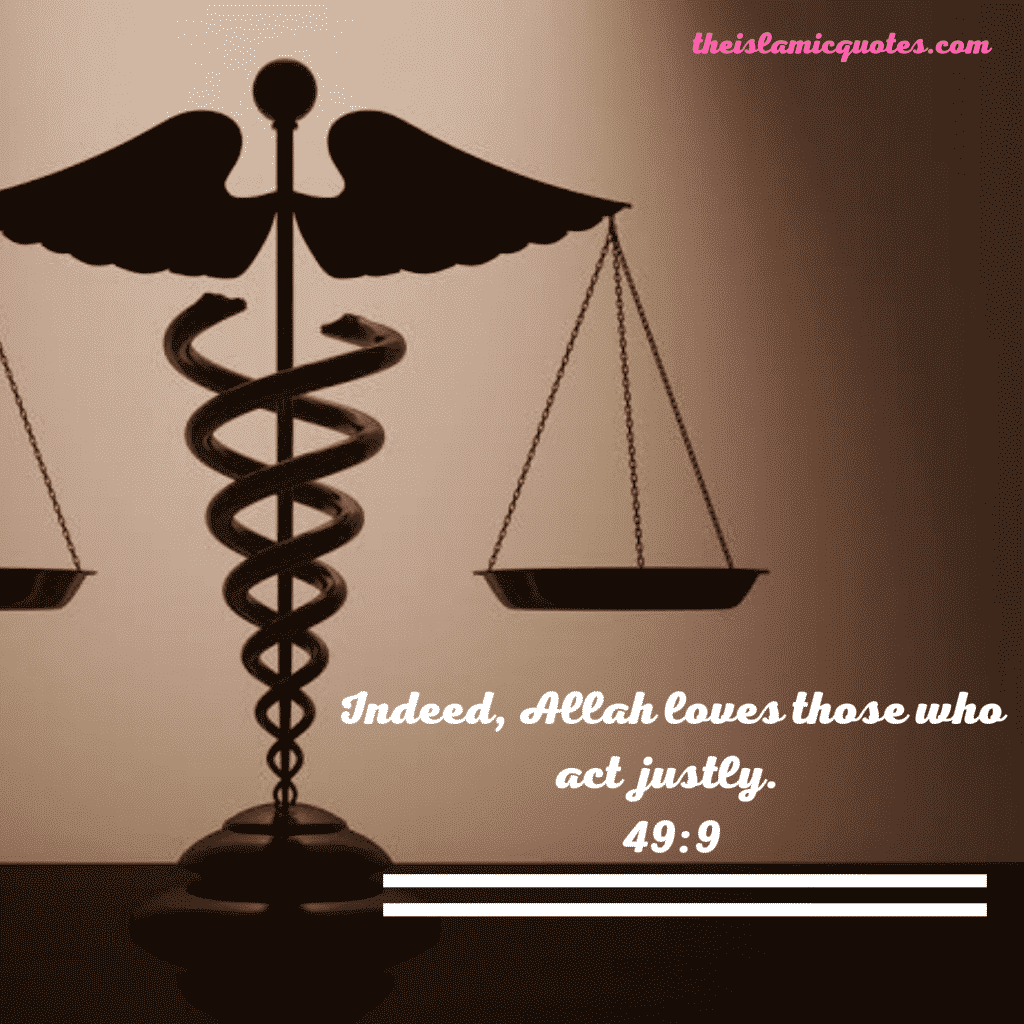 ↓ 4 – Being Conscious and Mindful of Allah’s Existence (Taqwa)

Taqwa is the most important part of Iman which means to have faith in Allah’s existence. One who believes and have iman will be very conscious of Allah and fear Him as this fear keeps us away from sins and Haram acts and guards our iman. Being mindful of Allah’s Existence instills a love for Him and protects our souls from all worldly evils. Allah Himself in the Holy Quran has asked us to practice Taqwa and follow our Holy Prophet Muhammad (PBUH) to save our souls from spiritual corruption. 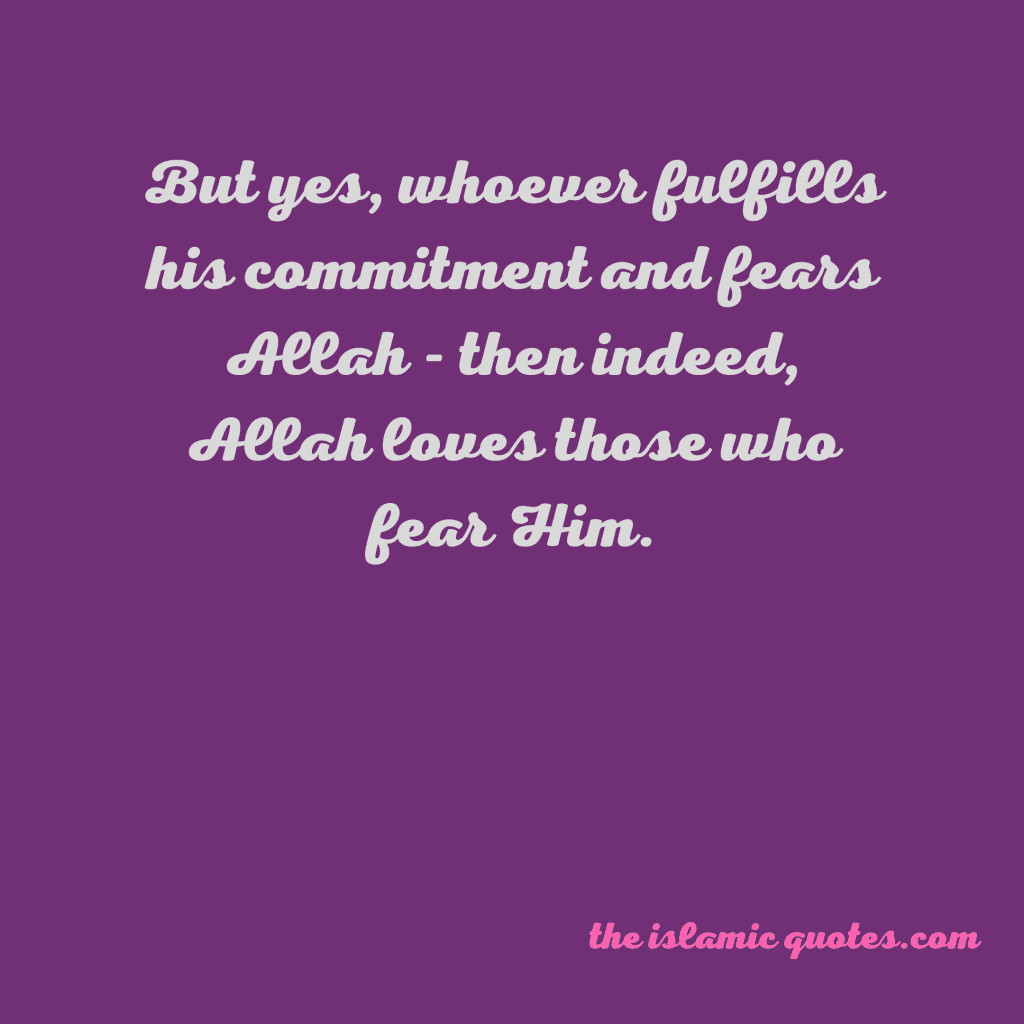 Allah in the Holy Quran talks about Al Muhsinun (the doers of good) that they’re the ones closest to Him. Al Muhsinun are those who,

Surely, these people are the ones loved by Allah SWT. 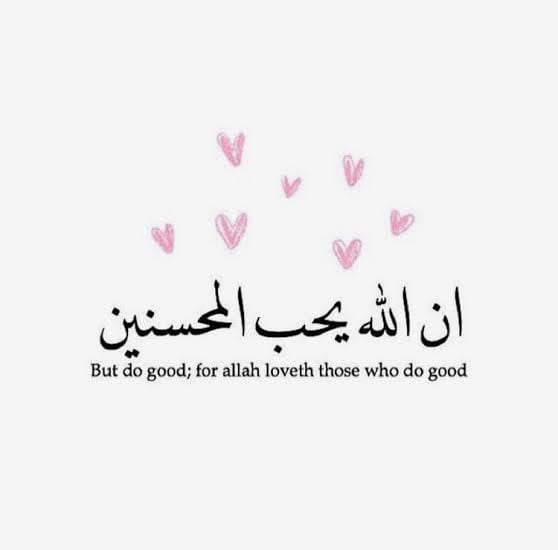 Those who give love only to please Allah SWT, do not expect in return from people. They forgive others like they want to be forgiven by Allah and pray in their absence. Such people are very dear to Allah SWT for their unconditional peaceful love and will be under His shade on the day of judgment. 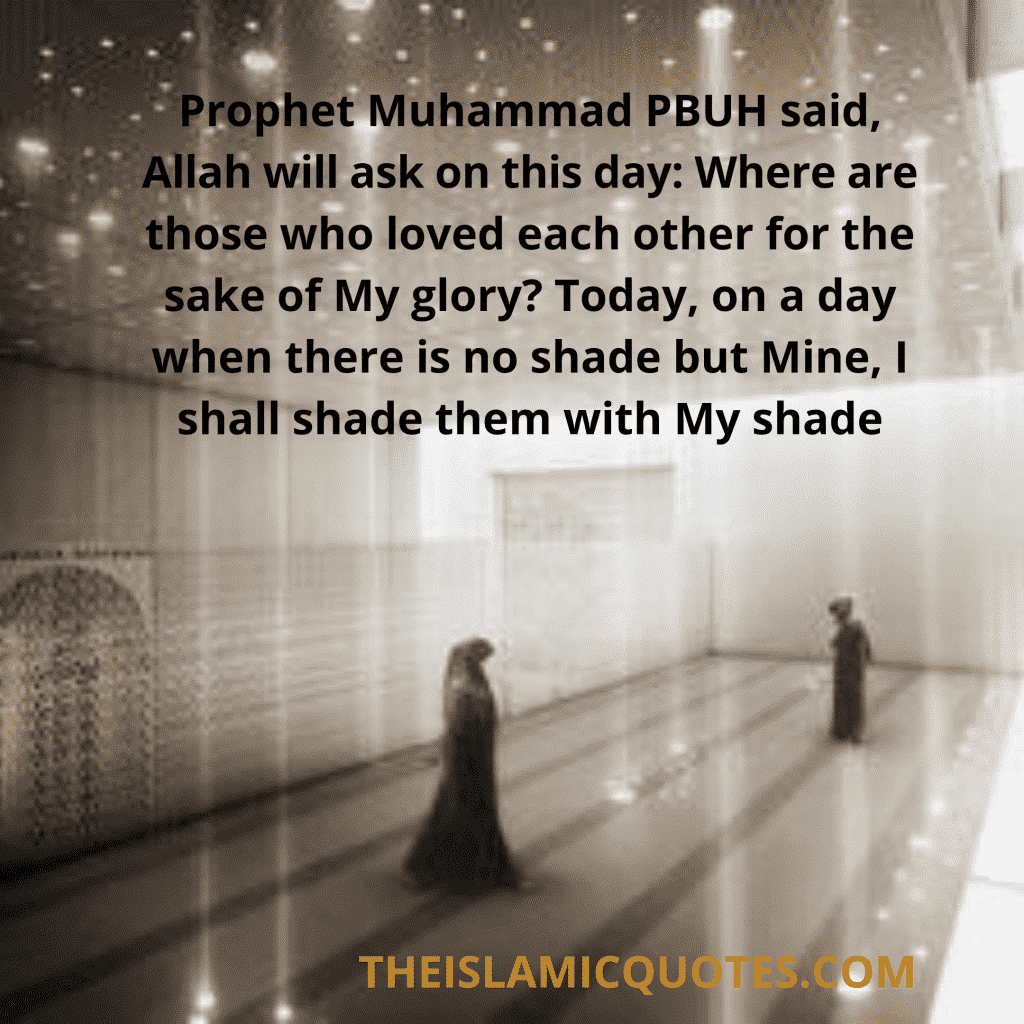 Humility is to think of oneself as better than others due to race, color, caste, status. In Islam, arrogance and thinking better of oneself is looked down upon. Instead, a humble believer,  who is gentle and calm, is the most beloved to Allah SWT. Humility comes from complete submission to His will and decree and having complete faith that honor belongs to Allah alone and we are all creations of Him. Therefore we should always remain kind and gentle towards all. Arrogance is the way of Shaytan that led him astray from the right path.

And turn not your face away from men with pride, nor walk in insolence through the earth.  Verily, God likes not each arrogant boaster.” (Quran 31:18) 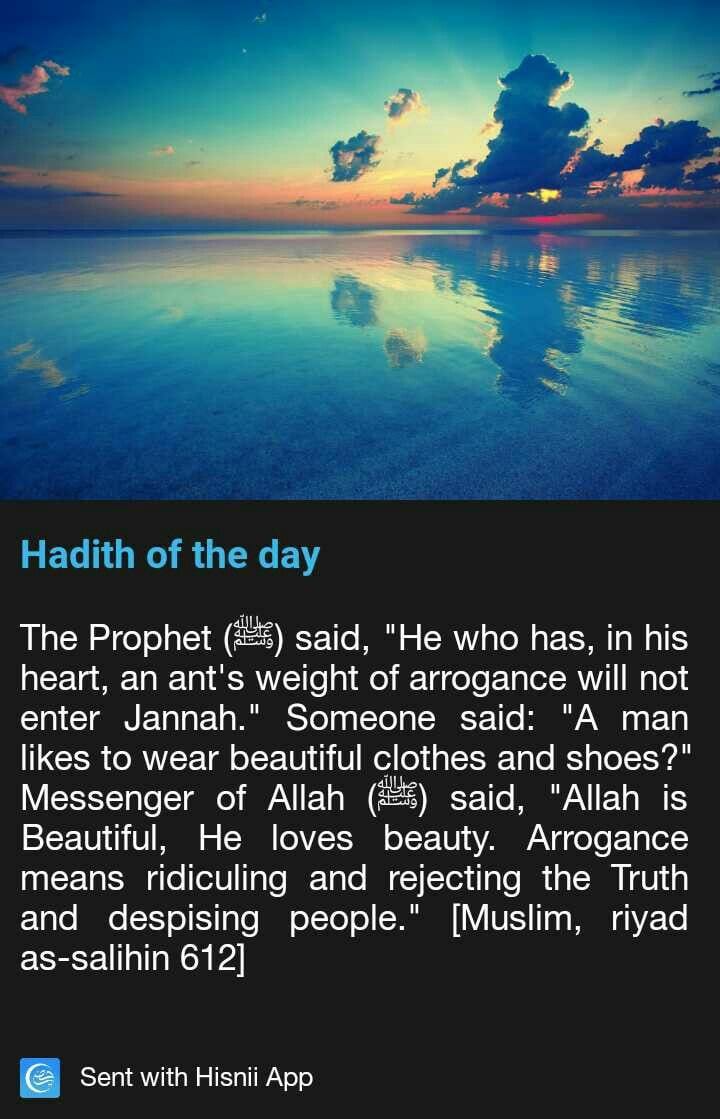 Sajal Waseem is a major in psychology and works as a freelance writer. She’s a writer by day and an avid reader by night and likes to have meaningful conversations. She aspires to become the advocate of mental health and remove the stigma from society.

The problem with many is they tend to focus on how big the problem is instead of trusting the Lord of the Worlds, where nothing is impossible. Ask Him for guidance and He will direct your steps. He knows what you need. So keep walking in faith and obedience. Don’t stop praying!