Etymologically the word Laylat ul Qadr means the Night of Importance. However, Muslim scholars translate it in many other ways as well. For instance, this night is called as the Night of Decree, Night of Destiny, Night of Forgiveness, Night of Power, and so on and so forth.

Significance of Night of Qadr In Holy Quran

There are many other significant dates in the Islamic calendar that have been mentioned in the Quran but never have been a whole surah been dedicated for a day. Even, if we see Surah jummah, only three ayats in the final conclusion openly speak about it, the preceding ayats don’t have any mention of Jummah. 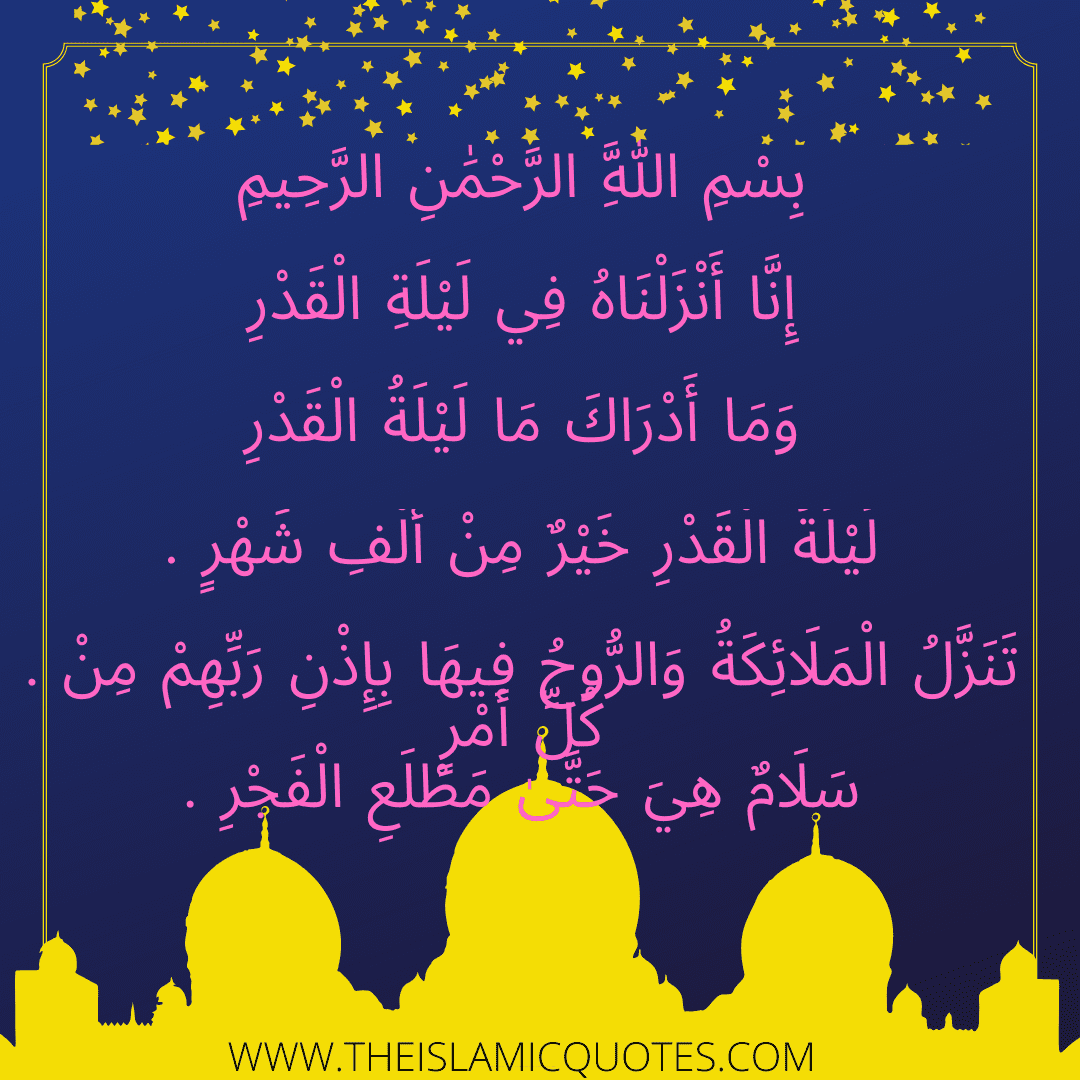 Muslims all around the world spend these nights in Rukooh and Sujood. They ask for forgiveness for their sins. They ask for Duas, their unfulfilled wishes. They serve Allah with Ibadah and they serve themselves with loads of Duas. Therefore, Duas are an imperative part of this night. 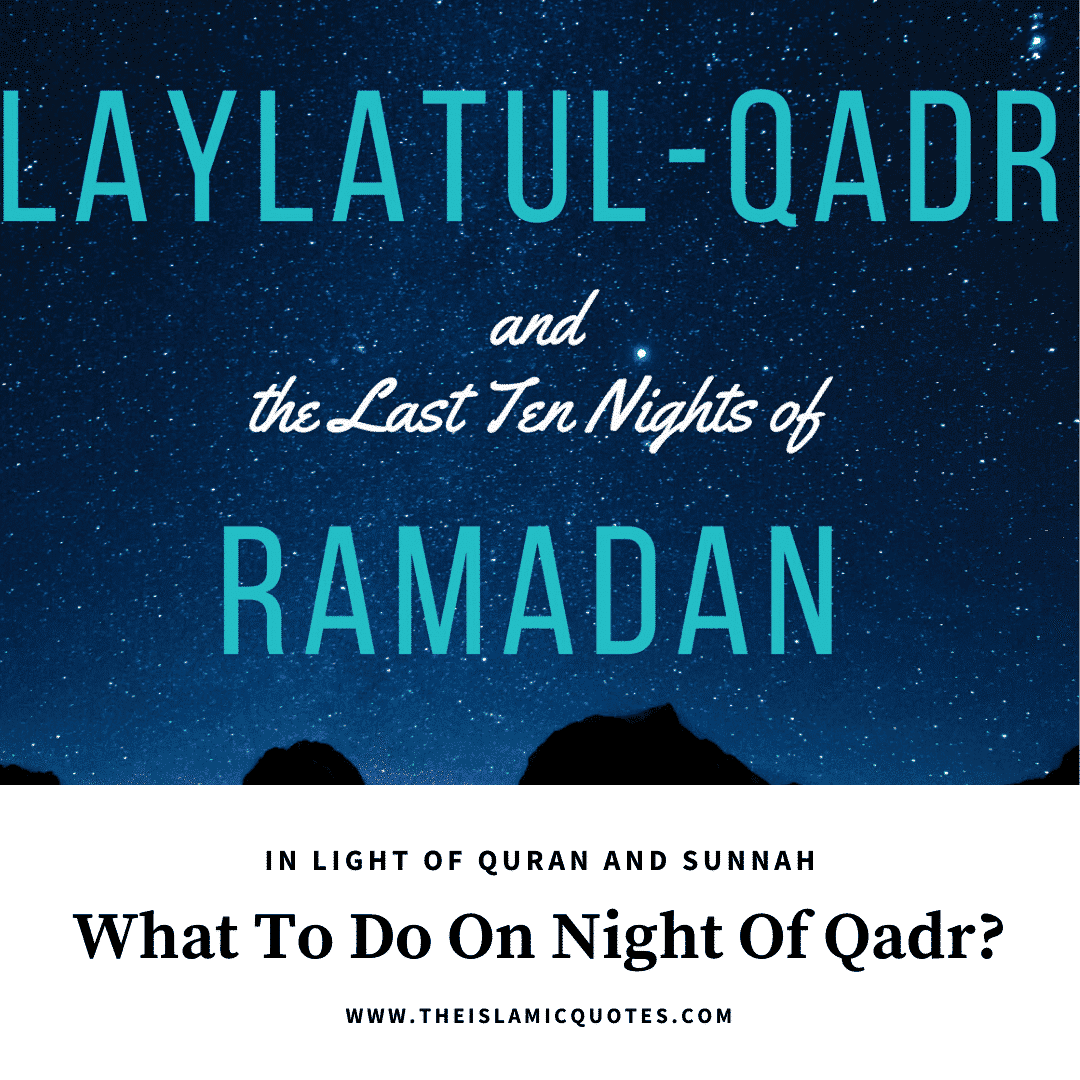 As if the revelation of one surah did not suffice its importance, Allah dedicates six more verses of the beginning of Surah Dukhaan to endorse the importance of this night. The Quran says: 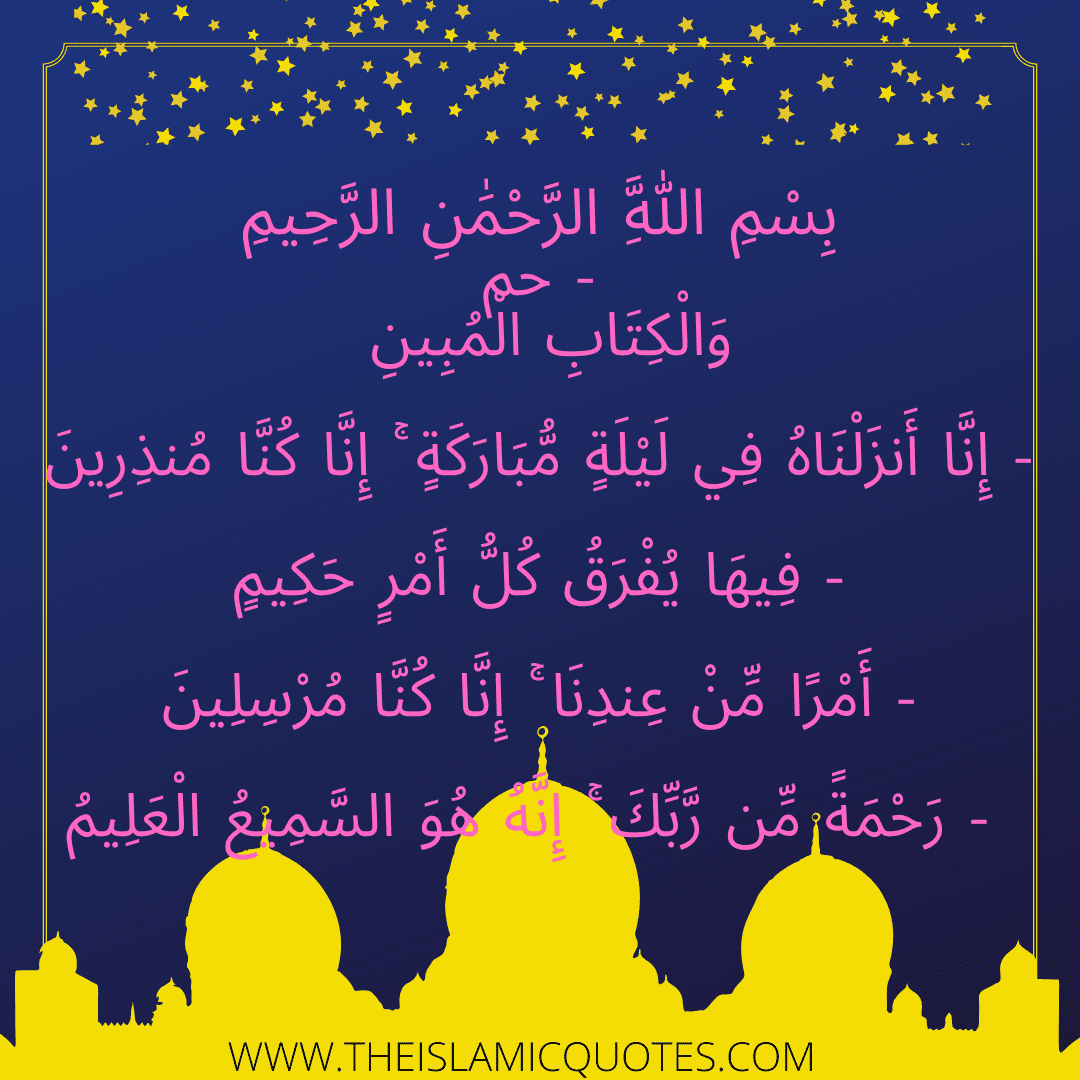 In the name of Allah, Most Gracious, Most Merciful.

What Is The Night Of Decree?

How To Spend The Last 10 Days Of Ramadan?

There are several traditions of duas from Prophet Muhammad (SAWW) which educates us with the importance of this night. Some of them have been mentioned in the points below. May Allah enlighten our hearts with the noor of emaan. Ameen

There is also a special link between this night and seeking forgiveness from God. A’isha asked the Prophet, “O Messenger of Allah! If I knew which night is Laylatul-Qadr, what should I say during it?” And he instructed her to say: 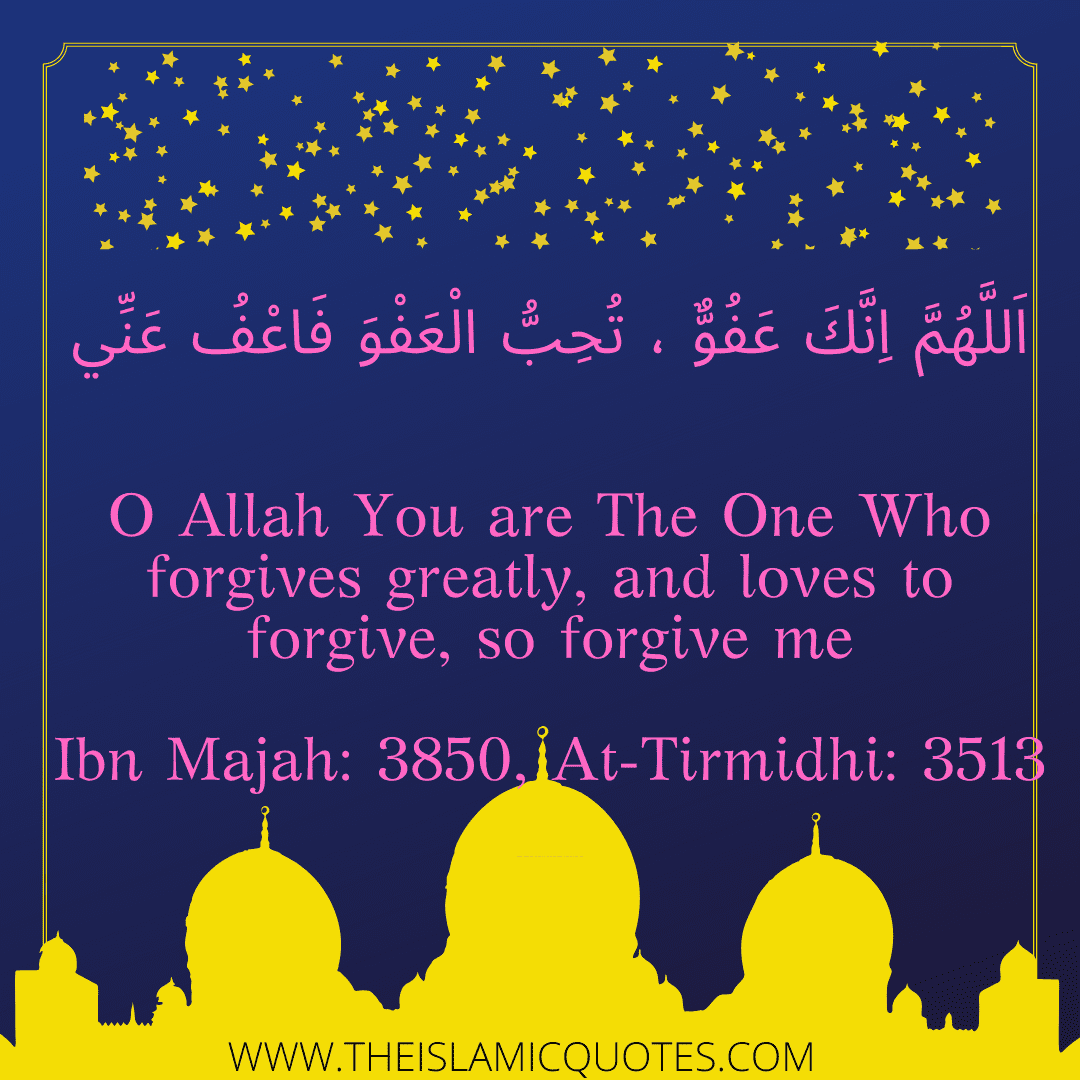 We also recommend that you go through these Islamic Quotes on Forgiveness.

The Prophet said: “Whoever prays during the night of Qadr with faith and hoping for its reward will have all of his previous sins forgiven.” (Bukhari and Muslim recorded from Abu Huraira).

Aisha (RA) reported: With the start of the last ten days of Ramadan, the Prophet (SAWW) used to tighten his waist belt (i.e. work harder) and used to pray the whole night, and used to keep his family awake for the prayers. (Bukhari) The nafli prayers are given below

The companion Anas ibn Malik reported: “Ramadan approached, so the Messenger of God said: ‘This month has come to you, and in it there is a night that is better than a thousand months. Whoever is deprived of it is deprived of all goodness, and no one is deprived of its goodness except one who is truly deprived.’ Sunan Ibn Majah, 1644. Here are Islamic Duas For Success That Every Muslim Should Know.

If you want to stay up the whole night, it’s important that you take a nap either in the day time or after iftar.

Try giving a little charity every night because if you give charity on night of qadr, it will be similar to giving it every day for 84 years. 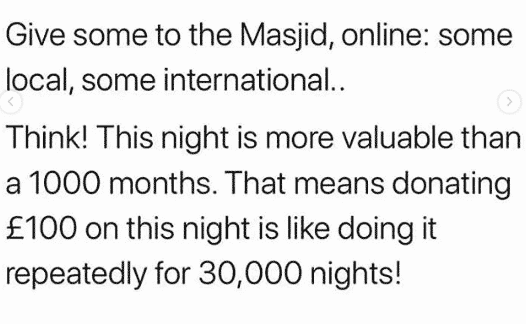 Try to read surah ikhlas every day in the last ten days at least three times, because that is equivalent to reading one-third of the Quran. If you get the chance to do this on the night of power, the reward will be multiplied for you.

👉🏻Please slide to view all 6 pages

Here are some dhikr recommendations for laylatul qadr: 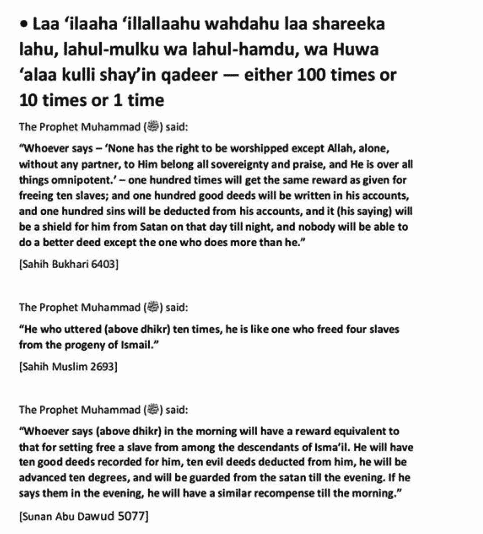 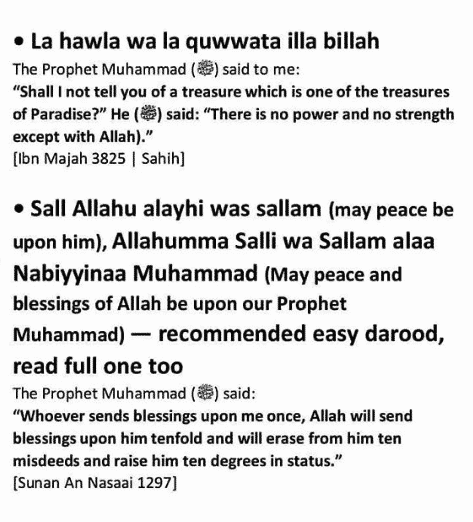 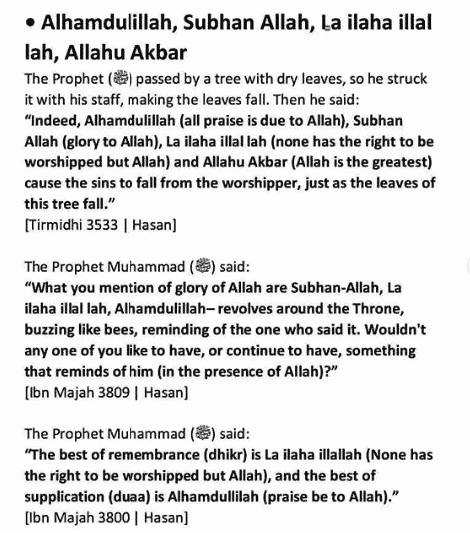 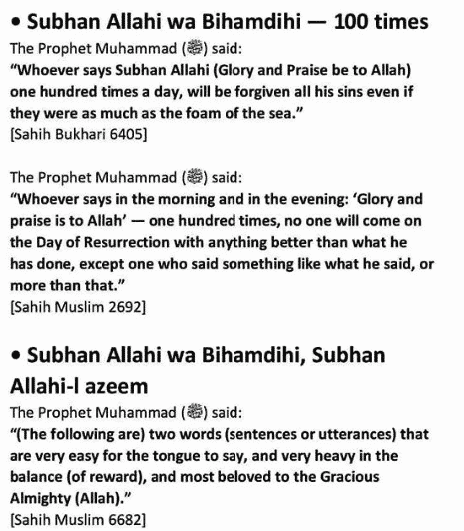 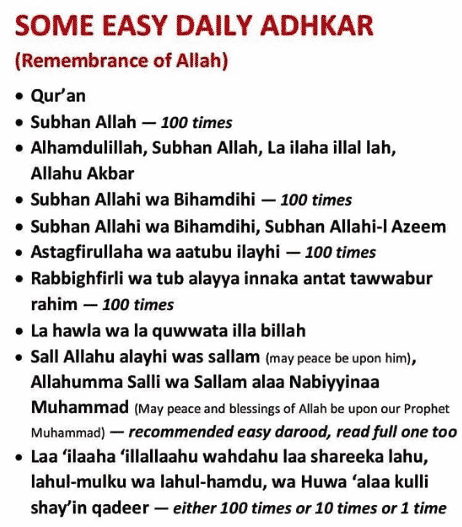 ↓ 9. Wake Your Family For Ibadat 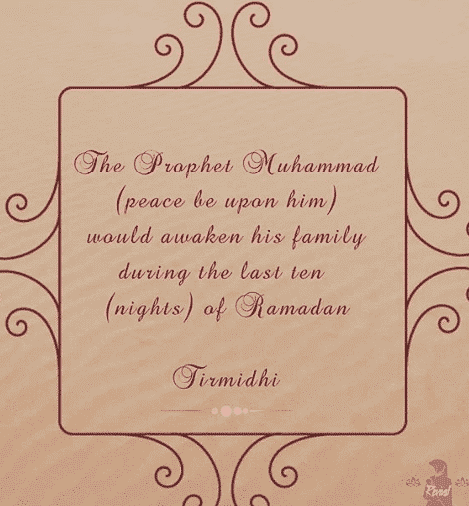 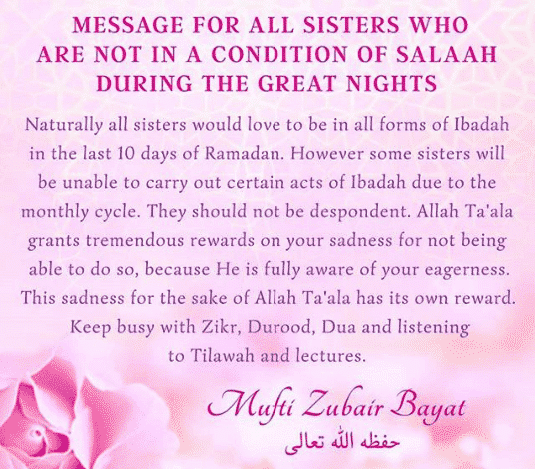 Signs of Night of Qadr

The Prophet Muhammad (SAWW) is reported to have said that the Night of Qadr is a gentle night and it is not hard, nor cold. It is a comforting night. Then he added, the sun rises on this day with soft rays and reddish complexion. Prophet Muhammad (SAWW) said that the amount of angels sent down on the Night of Qadr dulls the sun because the Arsh/ sky is filled with angels.

Being a person of sanity, one may ask how would we know about a night on the basis of the signs during the next day. The Prophet Muhammad (SAWW) explained that this night has been left mysterious, one should therefore never give up hope on the upcoming odd days. This way we

Although according to different traditions the night of Qadr may fall in any of the odd dates of the last ten days of Ramadan, meaning it may be, 21st, 23rd, 25th, 27th, and 29th. However, the majority of traditions call the 27th night to be the most probable night. Having said that, according to the Georgian calendar Laylat ul Qadr will be Inshallah on the 19th of May 2020.

Prayers for Night of Qadr:

There are specific namaz/prayers for the Nights of Qadr. In the book, Majmooa-e-oraad-o-wazaaif, authored by Molvi Ismat Ullah Hassan Zai, the following pattern of namaz is given as per the tradition of Messenger of Allah, Muhammad (SAWW).

Note:
You may contact the author in the comment section for any confusion in the prayer procedure.

May Allah accept our prayers, forgive us and keep us under His blessings. Ameen 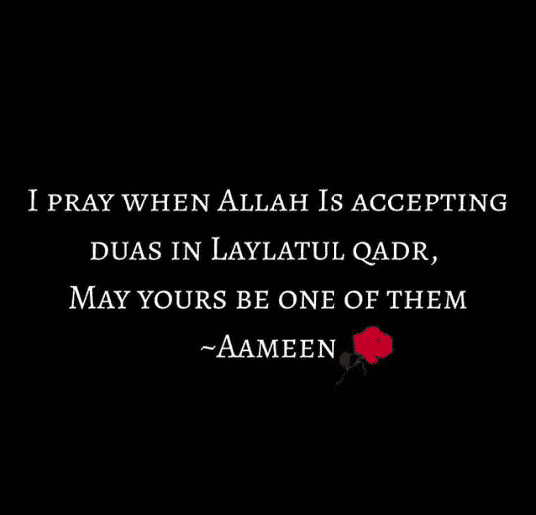 The problem with many is they tend to focus on how big the problem is instead of trusting the Lord of the Worlds, where nothing is impossible. Ask Him for guidance and He will direct your steps. He knows what you need. So keep walking in faith and obedience. Don’t stop praying!