Drawing, sculpture making, and painting is a visual depiction of expressions, emotions, and thoughts that are conveyed by artists through appealing colors, shapes, and textures. Often they vary from portraying a particular event, renowned historical figures or religious scripts to beautiful landscapes, abstracts, or mythical entities.

Since time immemorial, painting has embedded its roots in every culture but the believers of Islam are often confused about this form of art. Is drawing a shirk? Or is it haram to sell paintings? To answer these prevailing questions, here are some Islamic quotes that indicate the dos, don’ts, and the status of art and drawing in Islam.

What Does Islam Say About Art? 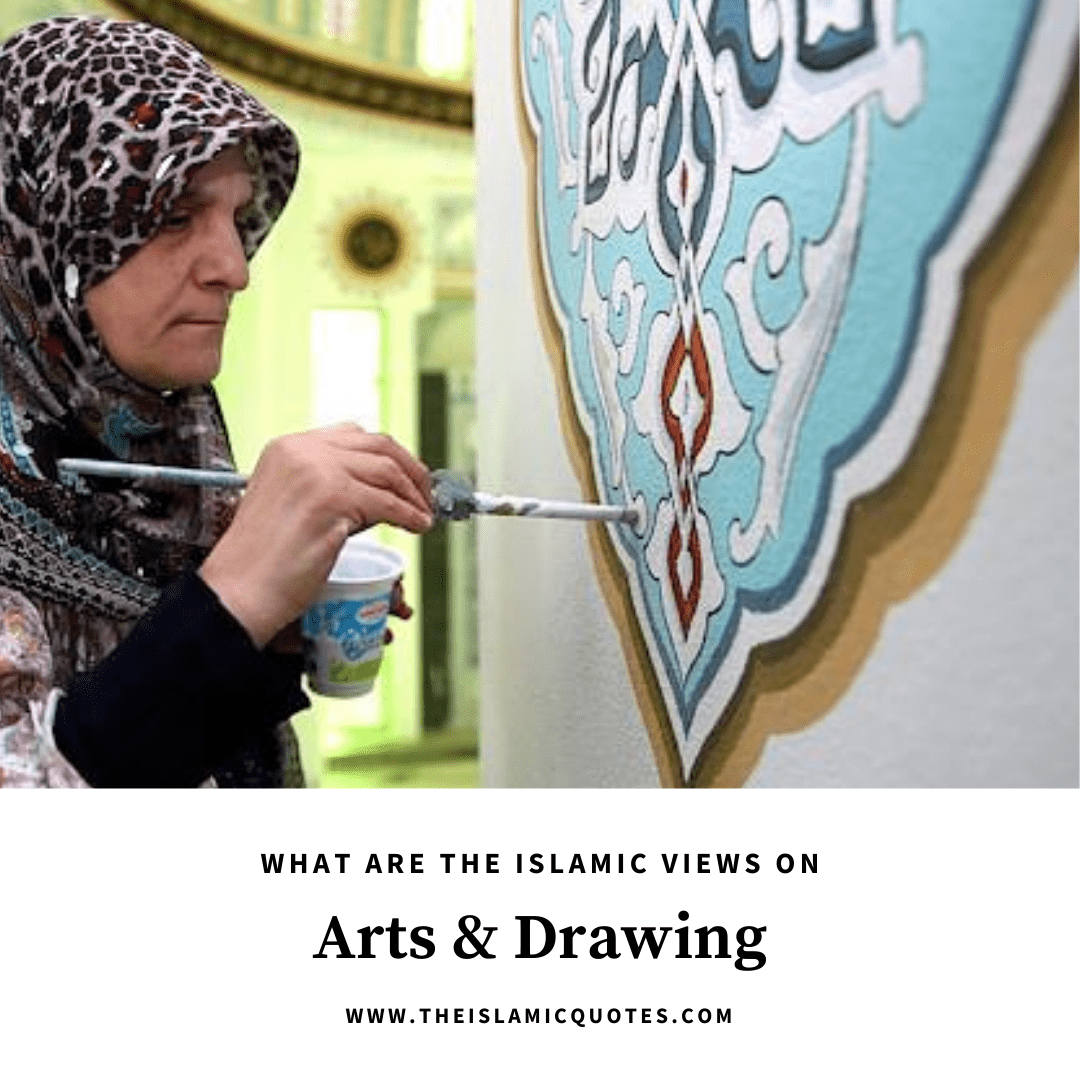 Sayings in the Holy Quran about painting

There is no specific verse in the Holy Quran about drawing which is why some scholars say that it is okay to paint. But in a similar context, Allah (SWT) has mentioned many times in the Quran that those who create and worship pictures and sculptures as idols are not among Muslims because they are those who associate partners with the one true God. 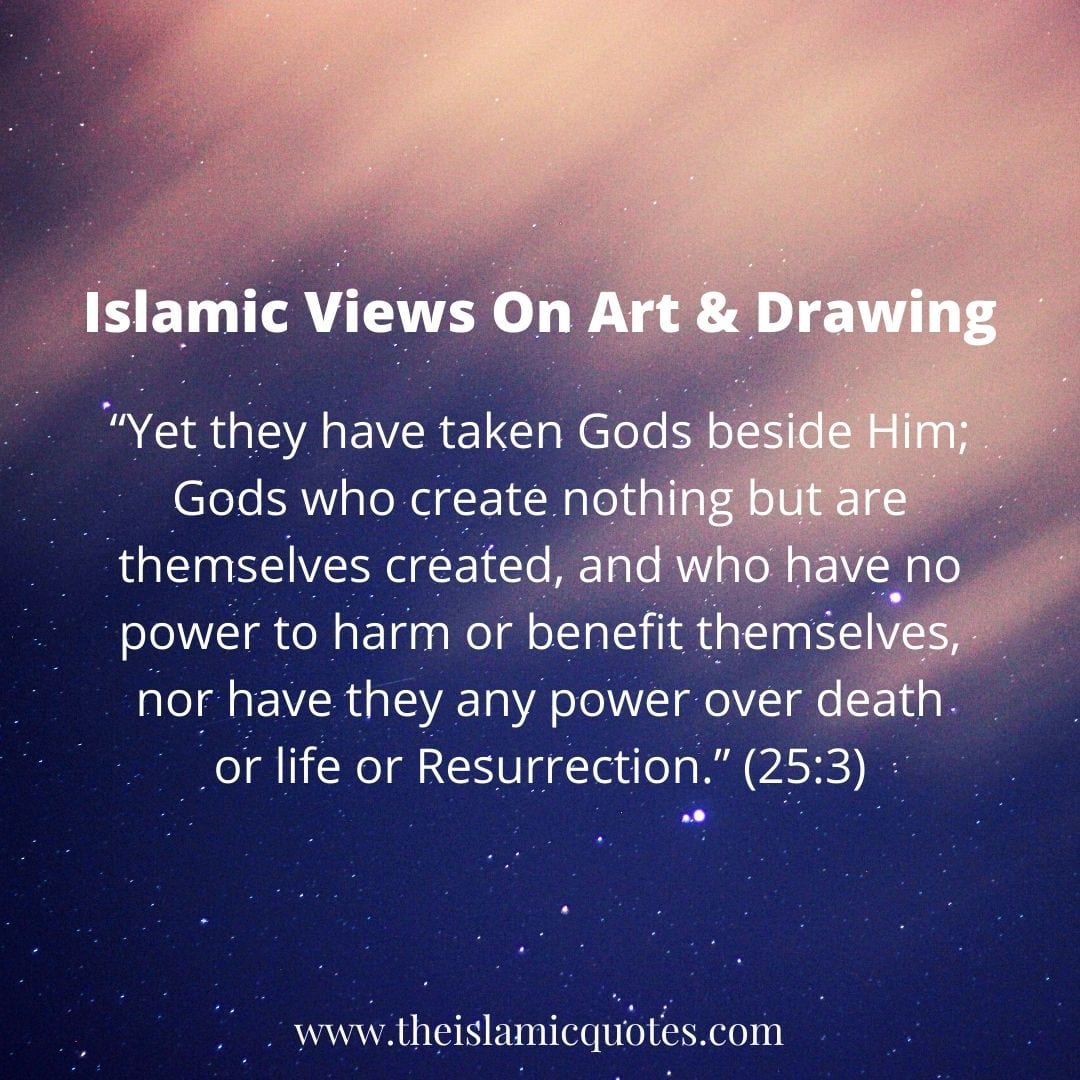 Creation is a quality of Allah Almighty and any person who tries to imitate it is severely disliked. Since making paintings comes in the form of creation hence many schools of thought have declared that it is prohibited in Islam.

Rulings on Drawing from the Quotes of Prophet (PBUH)

The Sunnah of the Prophet Muhammad (Peace and blessings be upon him) has made it clear that those who paint and draw anything that remotely resembles life or living beings will be strictly punished on the Day of Judgement. The following hadith narrated by Abu Zur’a (R.A) validates the above-mentioned verse from the Holy Quran and the fact that painting pictures are not allowed in Islam, 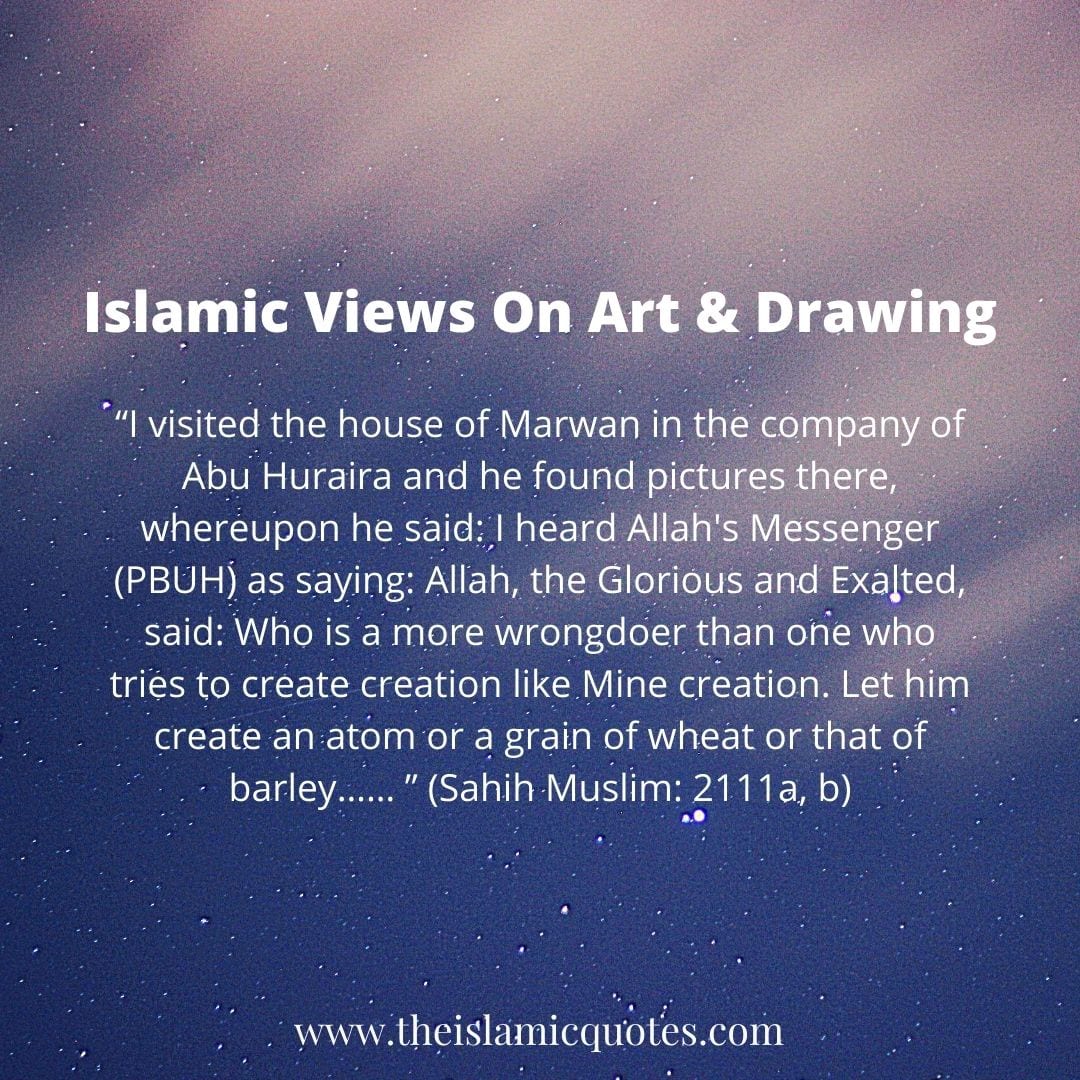 During the Prophet’s (PBUH) life there were many instances when he (PBUH) expressed his aversion towards those who indulged in painting or adorned their houses with painted objects. Reported by Aisha (R.A), 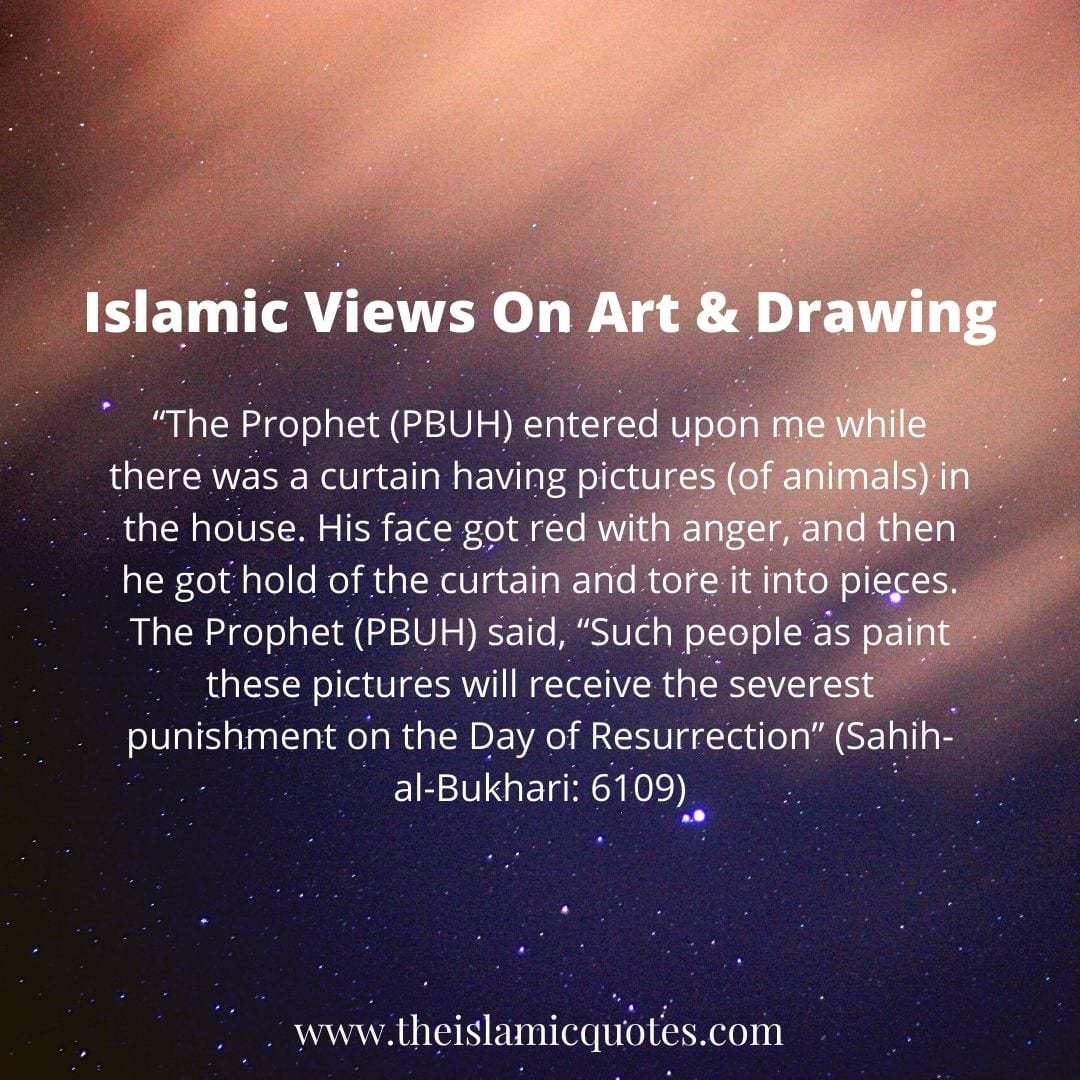 So is it haram to draw animals, birds, and humans? Plain and simple, the reply is yes. Even the ruling on drawing eyes in Islam or other facial organs falls under the same category because they are the essence of life. However, if drawing a living organism is required then it should only be a silhouette or a shadow. As told by Ibn ‘Umar (R.A), Prophet Muhammad (PBUH) said,

“Those who paint pictures would be punished on the Day of Resurrection and it would be said to them: Breathe soul into what you have created” (Sahih Muslim: 2108a)

Even the companions of the Messenger (PBUH) have been seen explaining the consequences of those who draw pictures on many occasions. Here is another hadith related by Anas b. Malik (R.A) that further explains the fate of those who draw or paint,

“I was sitting with Ibn ‘Abbas when he gave religious verdicts but he did not say that it was Allah’s Messenger (PBUH) who had said that. However when a man said to him (Ibn ‘Abbas): I am the painter of these pictures. Ibn ‘Abbas said: I heard Allah’s Messenger (PBUH) as saying: He who painted pictures in the world would be compelled to breathe soul in them on the Day of Resurrection, but he would not be able to breathe soul (in them)” (Sahih Muslim: 2110b)

The above-mentioned quotes are definitive of what Islamic law says about drawing. Also if the drawing of animate objects is not allowed then the same goes for buying and selling them or making a fortune out of them.

However, there is a false impression spreading among certain Muslims that these are just quoted from hadith books and since there is no specific mention in the Holy Quran, it is not sinful to practice painting. It needs to be mention here that the Sunnah of the Prophet (PBUH) teaches us the way of life and should not be disregarded. If he (PBUH) has instructed a certain act, then Muslims are obliged to follow it and he (PBUH) has forbidden something then it should be treated likewise without any questions. This is why we highly recommend that you go through these Most Beautiful Sunnah To Follow In Daily Life.

In today’s era of information technology and artificial intelligence where the dependency on fast processors and the internet is at large, painting and drawing have also been digitized and has paved way for multimedia, computer graphics imagery (CGI), cartoons, and the animation industry.

So the question arises is digital drawing haram? Or more specifically what scholars say about drawing cartoons in Islam? It is no surprise that cartoon animations and anime are gaining immense popularity among children and they often want to draw their favourite characters who inspire them or follow in the footsteps of a cartoon animator. But according to sayings of our Messenger (PBUH), the same rules apply to cartoons as they are designed to mimic a human being and come in the form of creating a living entity. Hence this makes digital drawing impermissible in Islam. 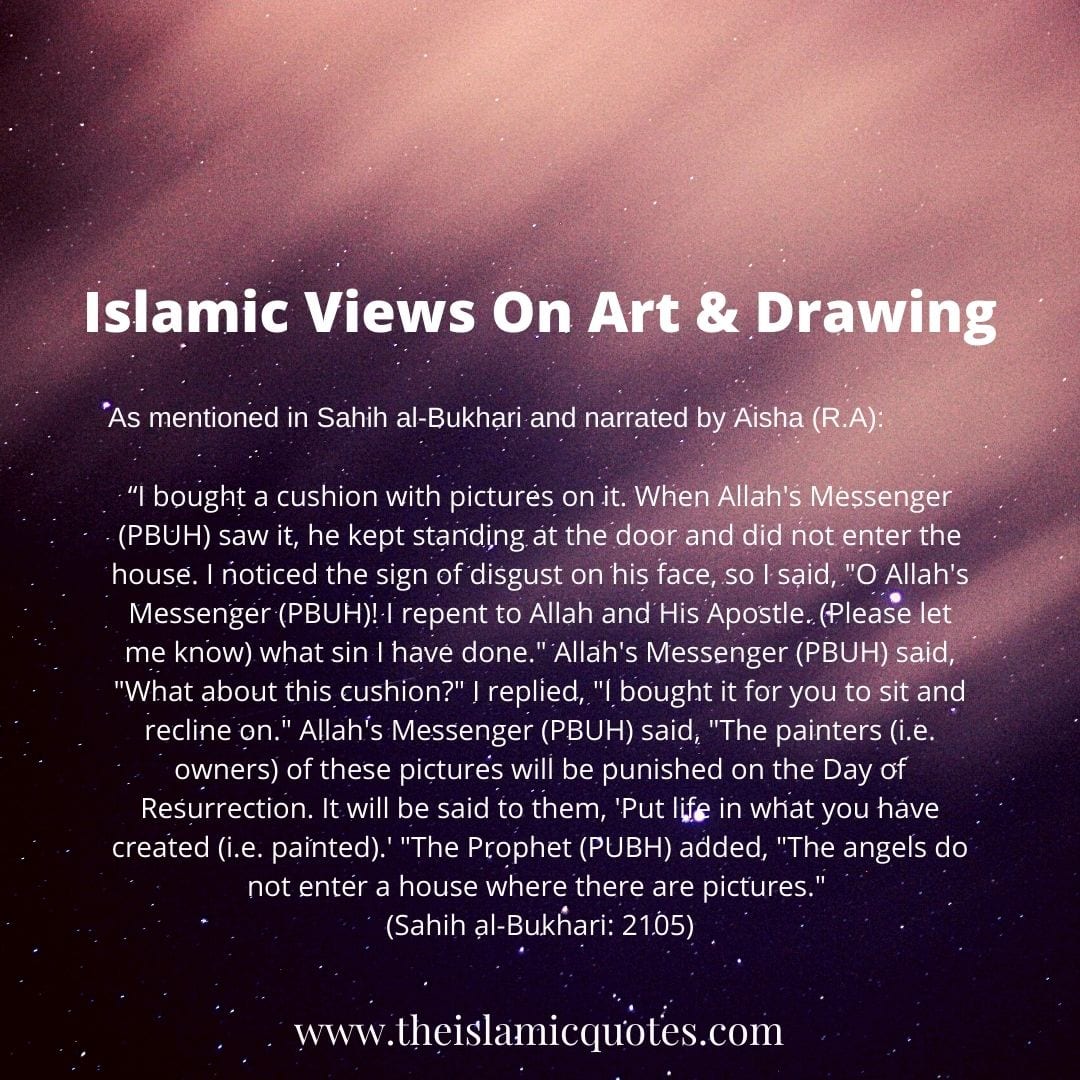 The Dos & Don’ts of Painting in Islam

There are certain exceptions to the acceptability of drawing in Islam. The hadiths mentioned above define that every image-maker will be in the fire that draws a living and breathable creature. As such there no sin in painting a non-living object like cars, airplanes, buildings, or scenic beauties like mountains, lakes, the sun, and the moon. There is a perception that plants are also living things so can you draw flowers in Islam or plants and trees? Yes, it is fine to draw them as confirmed by the following hadith of Sahih Muslim, 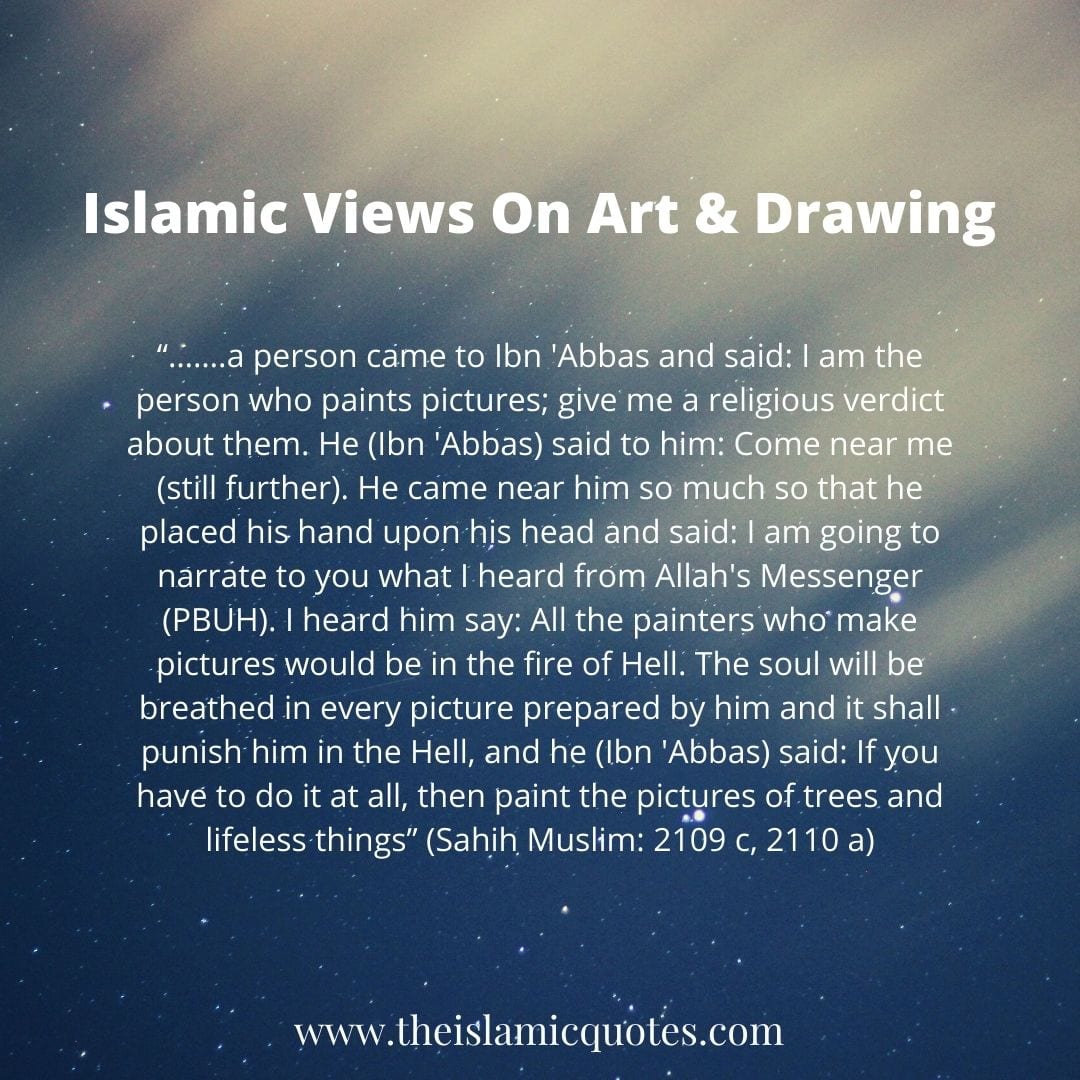 For Muslims, the best way to showcase their talent in painting is Islamic art calligraphy. It is usually the artistic writing of verses from the glorious Quran but can be a famous script in the native language of any Muslim nation. Islamic art is a pure representation of its culture and heritage and can be sold to potential buyers or used for mosques and household decoration.

Conclusion – Is Drawing Haram Or Halal?

“Abu Hurayra reported that the Messenger of Allah, may Allah bless him and grant him peace, said, “The Final Hour will not come until houses’ adornments resemble painted garments.” (Al-Adab Al-Mufrad: 777)

The Holy Quran is a miracle itself that has continued to inspire its readers throughout centuries. It provides a pool of knowledge that encompasses every walk of life where the more you dive deeper, the more it opens up to you while strengthening your belief in its Author. Combined with the Sunnah of Prophet Muhammad (PBUH) as an understanding of Allah Almighty’s Words and guidance for all humanity, no wonder Islam is a complete religion that delivers a solution to every problem our present generation is currently facing or might be faced within the near future.

He who has a thousand friends has not a friend to spare, And he who has one enemy will meet him everywhere.