Furthermore, he wrote numerous books filled with great quotations and statements about life, love, and teaching us different rules in our daily lives.

As an imam, Imam Hanbal was responsible for providing religious guidance and education, which is why his quotes are so important. He taught that Allah doesn’t exist everywhere. According to him, Allah is above the heavens, and He is fully aware of everything. 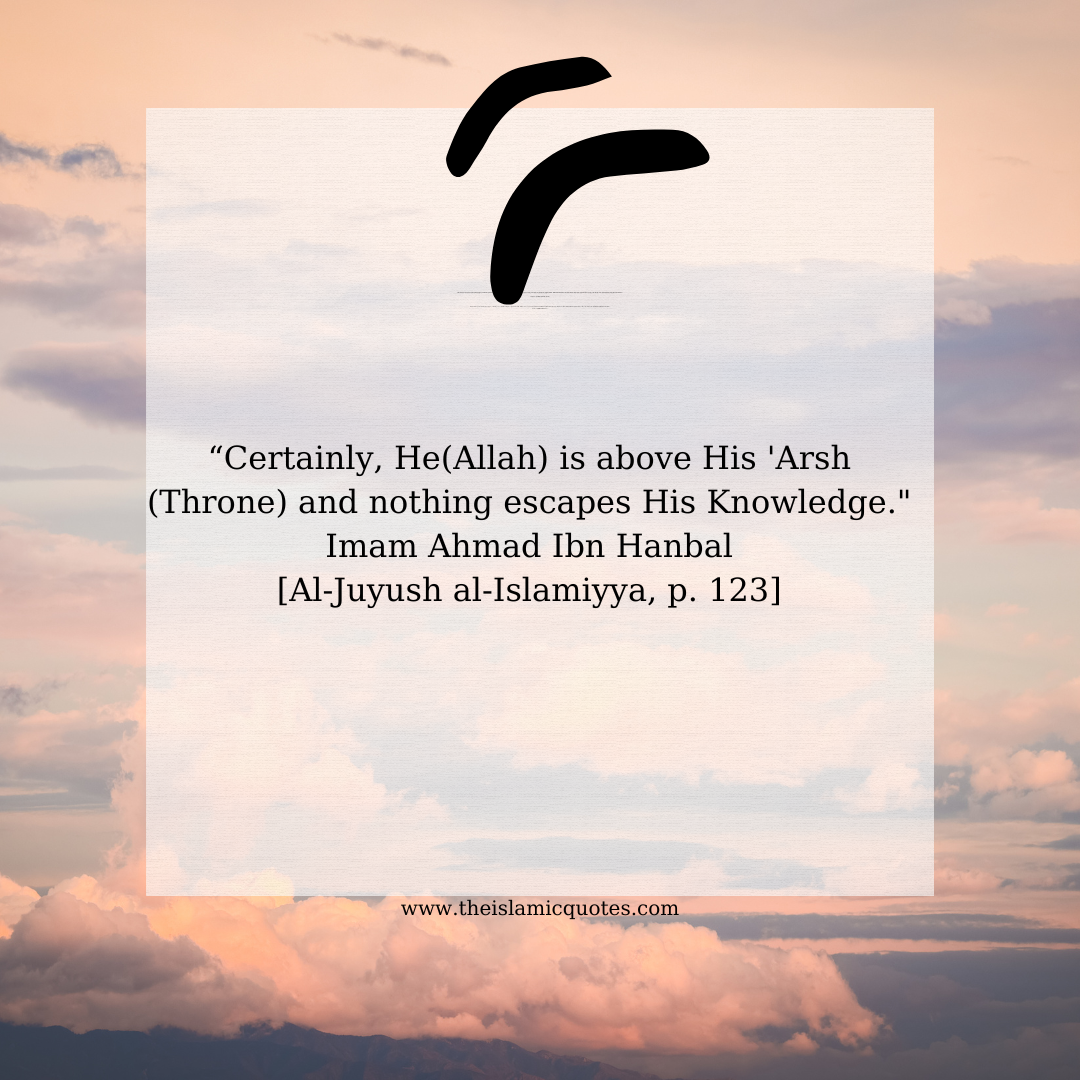 We must contemplate and aspire to the Sunnah of the Holy Prophet Muhammad (PBUH) and the Quran. Moreover, in his subsequent quote, Imam Ahmad Ibn Hanbal encourages people to follow the fundamentals of the Sunnah, including imitating Allah’s Prophet and his companions and renouncing bid’ah because it leads to sin. 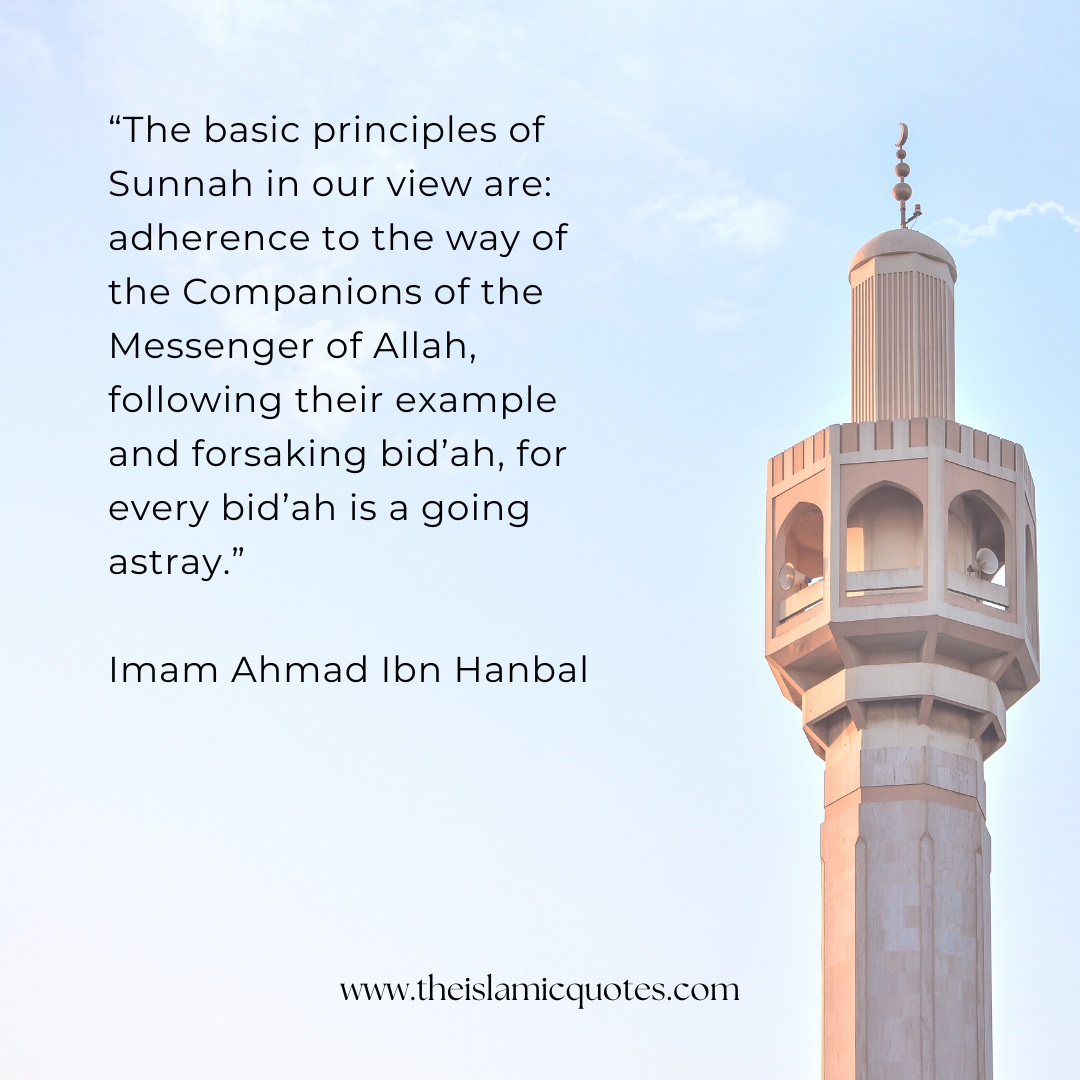 According to this quote, do what Allah loves if you want Him to consistently provide you with the things that make you happy. 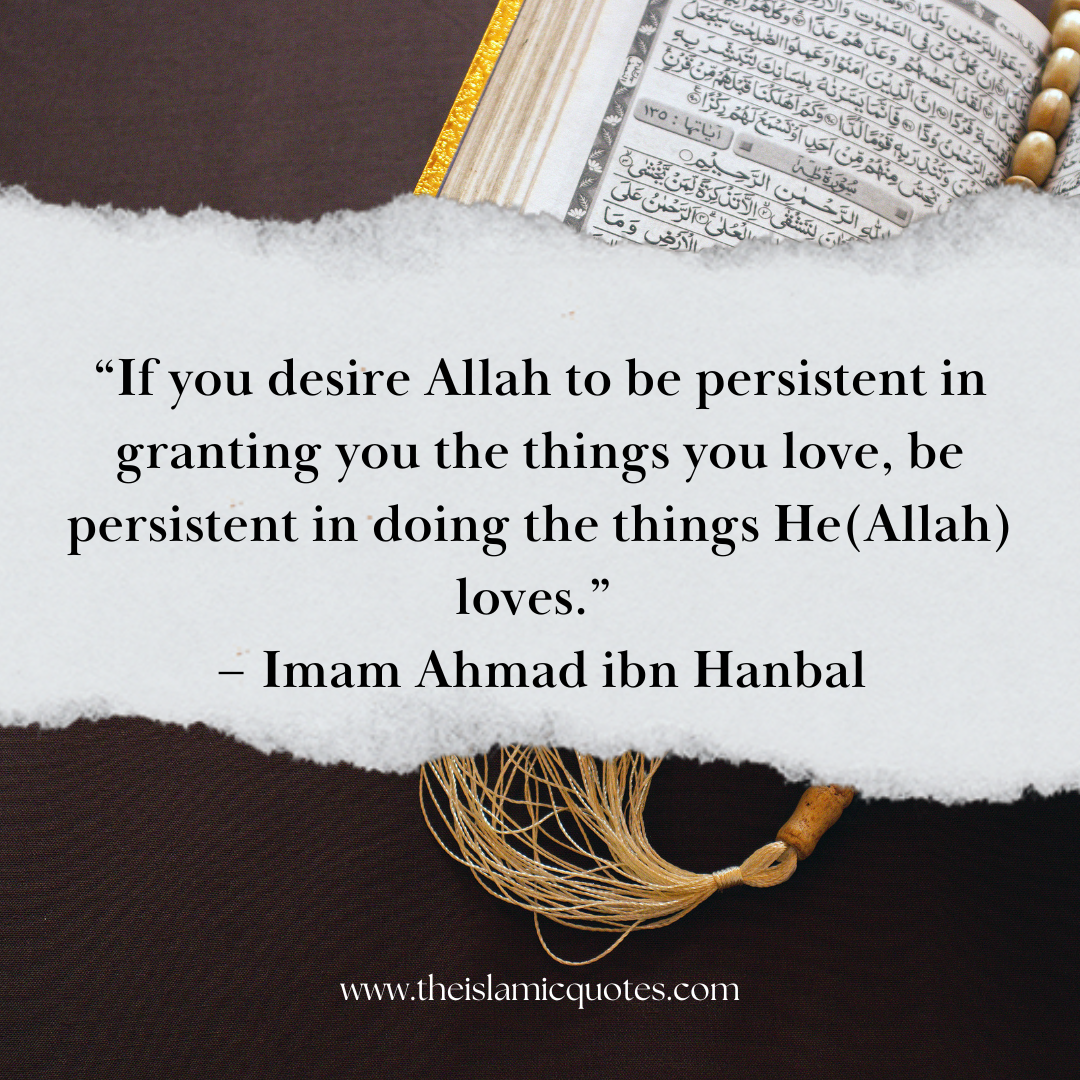 Along with highlighting the Holy Quran and Sunnah, Imam Ahmad (May Allah SWT have mercy on Him) also provided instructions on how to live a model life by following particular rules. The following quotation highlights the value of greeting one another and how to do so. 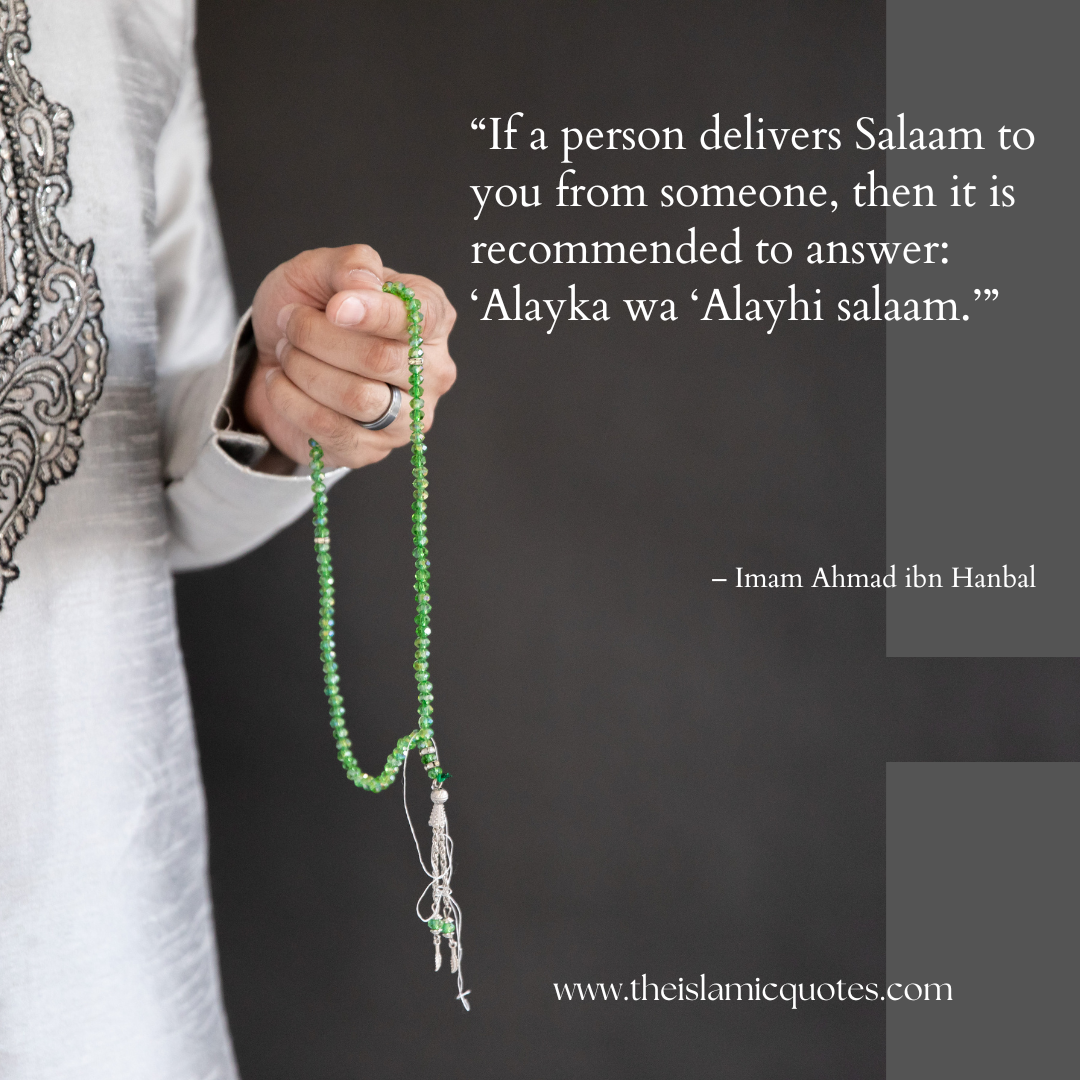 Imam Ahmad ibn Hanbal forbade all music except for the kinds of music that the Sunnah specifically mentions as an exception.

According to Imam Ibn al-Jawzi’s book Talbees Iblees, Imam Ahmad answered Abdullah, his son, and his pupil regarding his opinion of music. That quote is mentioned below: 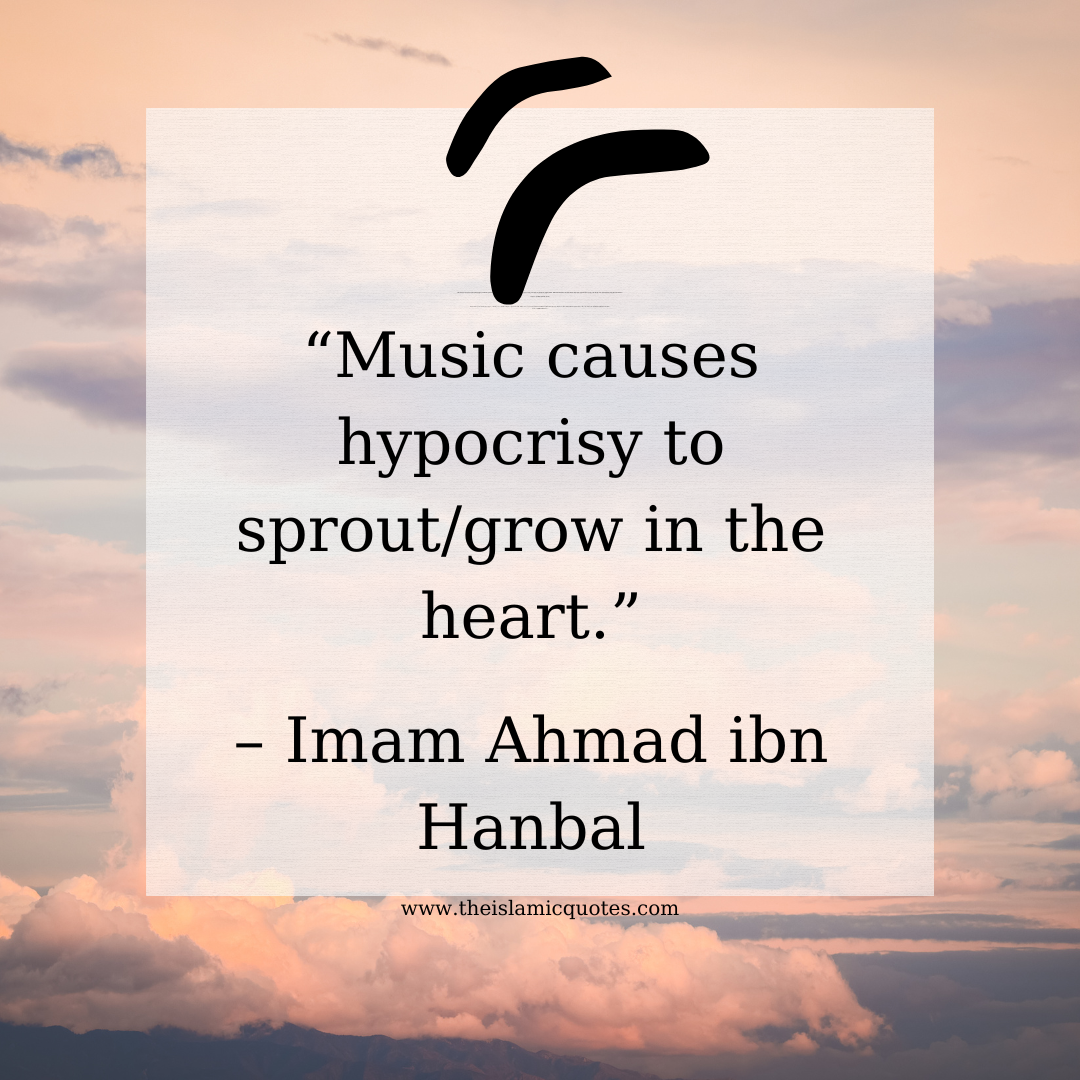 You can learn more on this topic from our detailed post on Music In Islam.

The following quotation of Imam Ahmad Ibn Hanbal defines practical knowledge in Islam: as the knowledge that is obvious in our deeds and that we require endlessly, even more than we need for food. 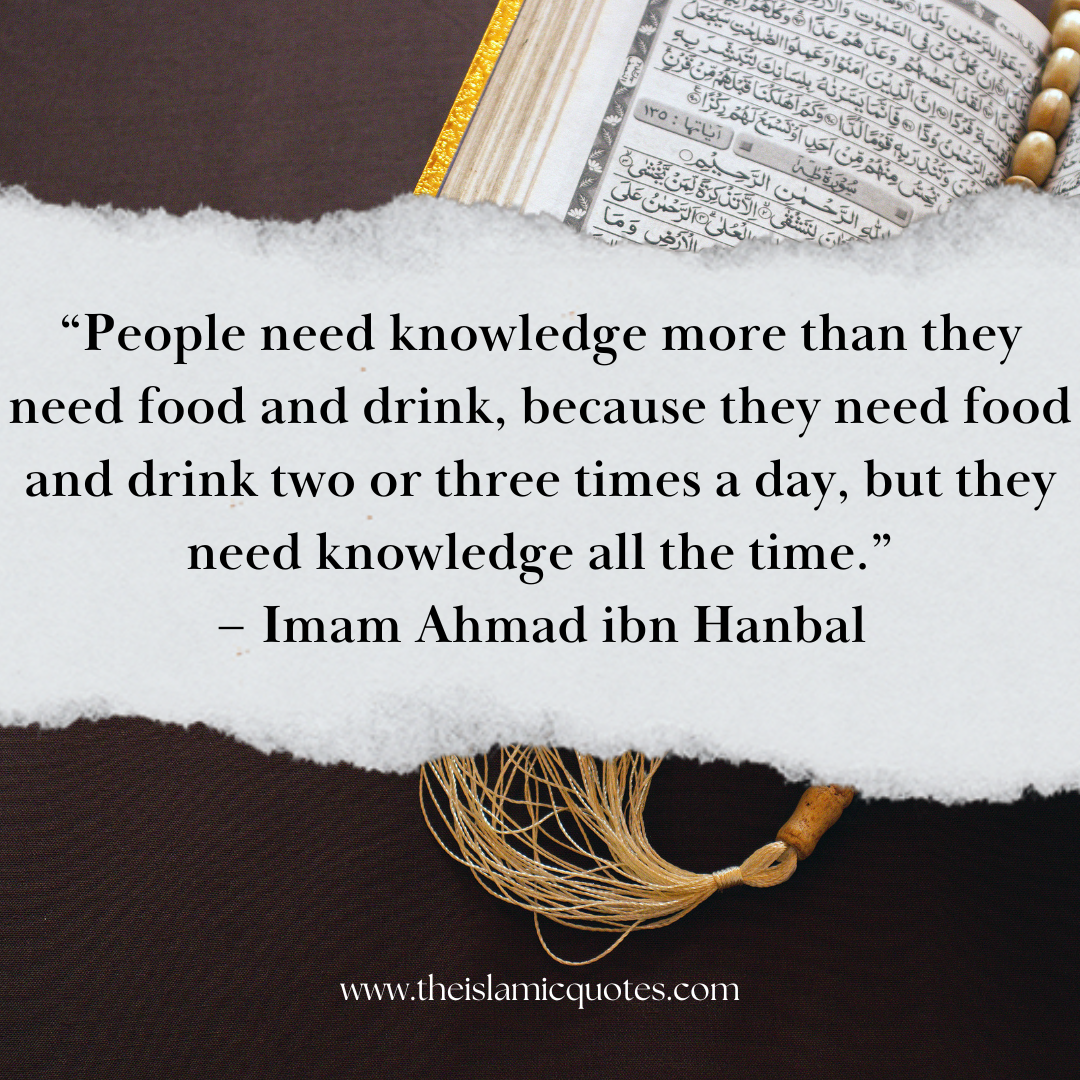 When we think about intentions and their effects on the universe and our lives, we might get too caught up in the material world. Intending for goodness means having a positive outlook on life and those around you.

You must always lead with the intention of goodness and positivity to achieve these two goals and send them out into the world around you. The following quote by Imam Ahmad Ibn Hanbal also explains the importance of good intention. 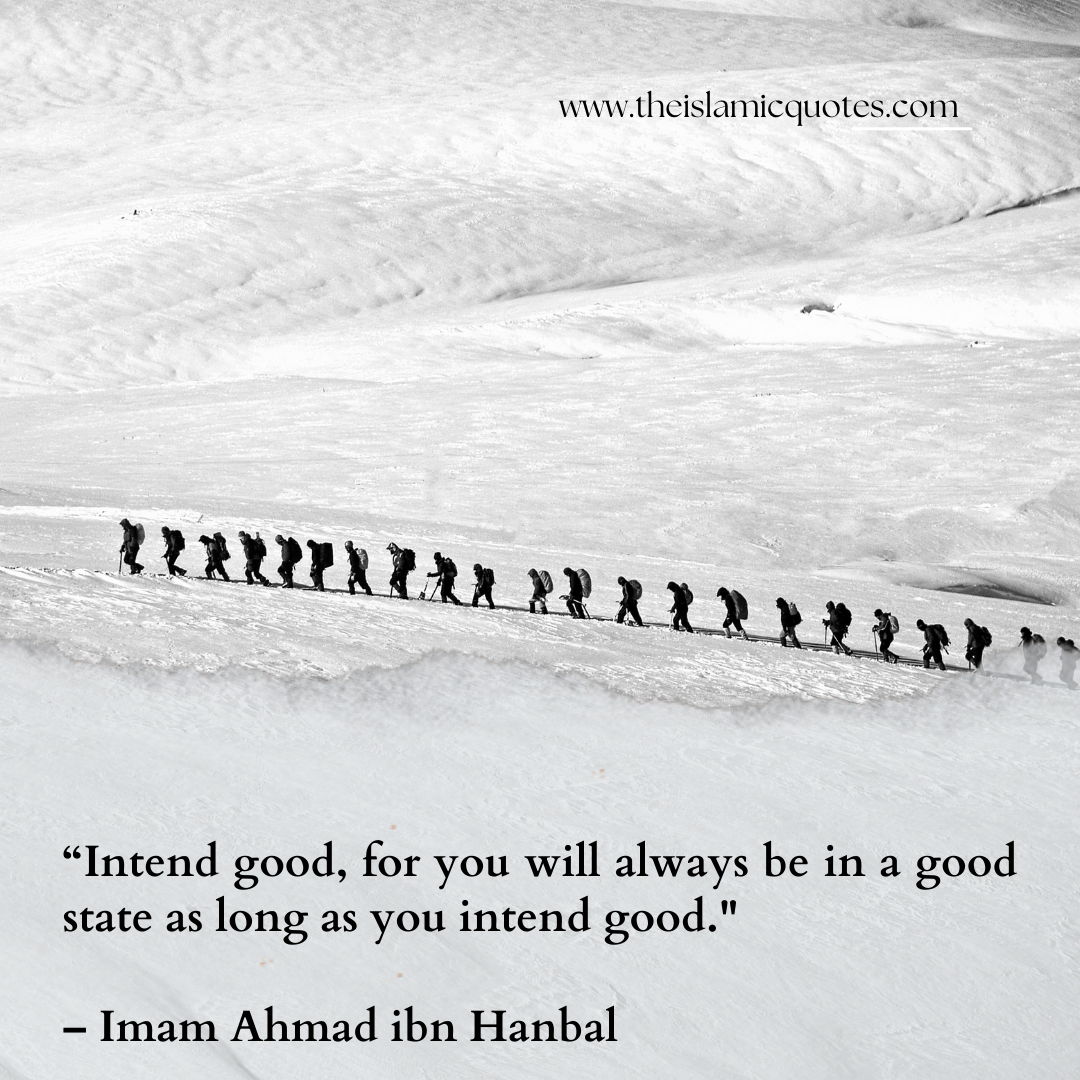 Allah, the Almighty, and the All-Powerful have promised to reward those who bring their hearts closer to Him. And so we are blessed with everything we need for our life on this earth.

The following quote by Imam Ahmad Ibn Hanbal (May Allah have mercy on Him) also explains the concept that Allah is the blesser of hearts. 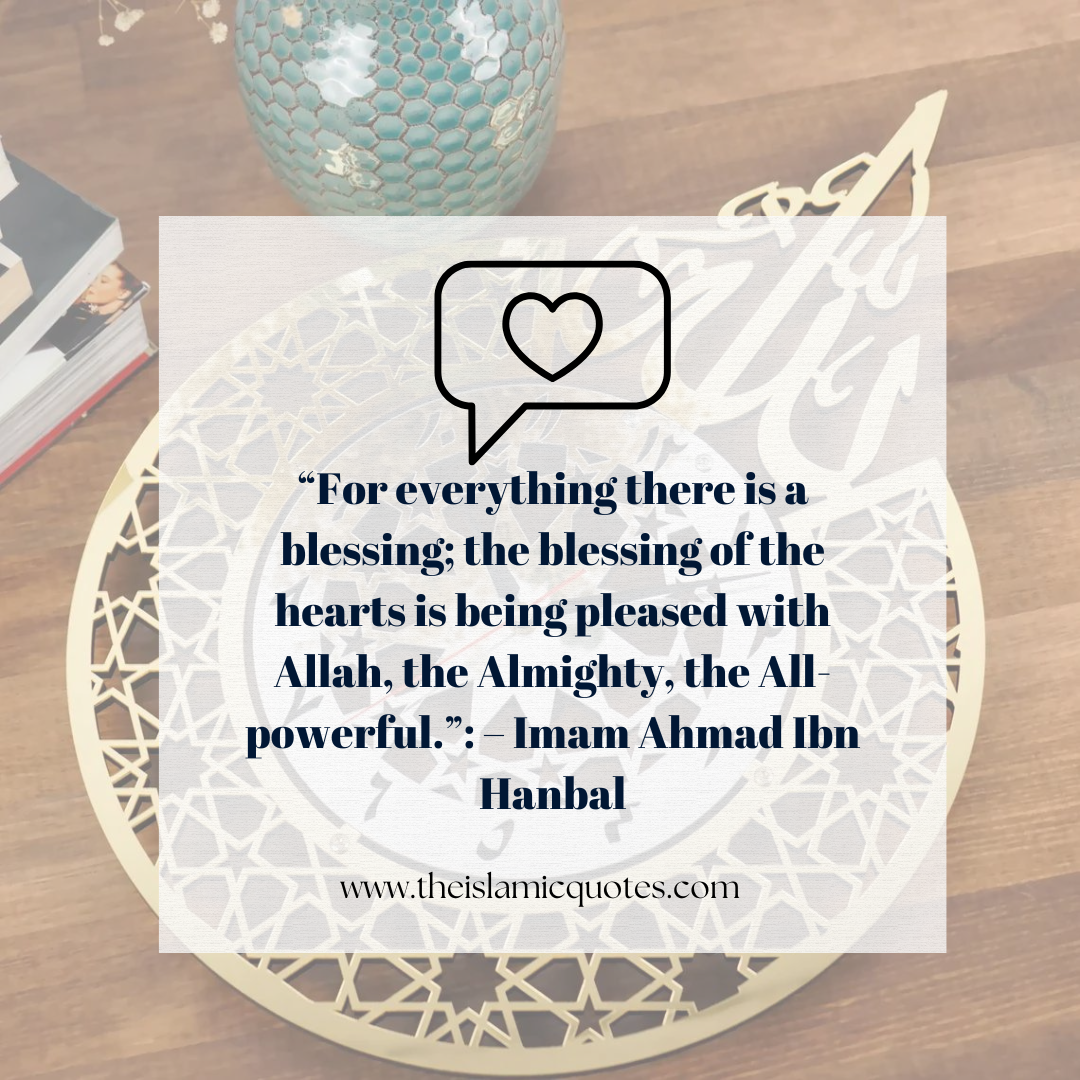 Many people think believing in God and still working independently is contradictory. They feel we should rely on Allah but not on our abilities to gain our livelihood.

They say that if we rely on Allah, then there is no need for us to work hard, so we can earn money and pay for the needs of the family. But this isn’t the message Islam wants to give its followers and believers.

As Imam Hanbal tells us in the following quote, if you have faith in Allah, he will help you. You should still work hard and take care of your family’s responsibilities. Indeed Allah is the best of planners. 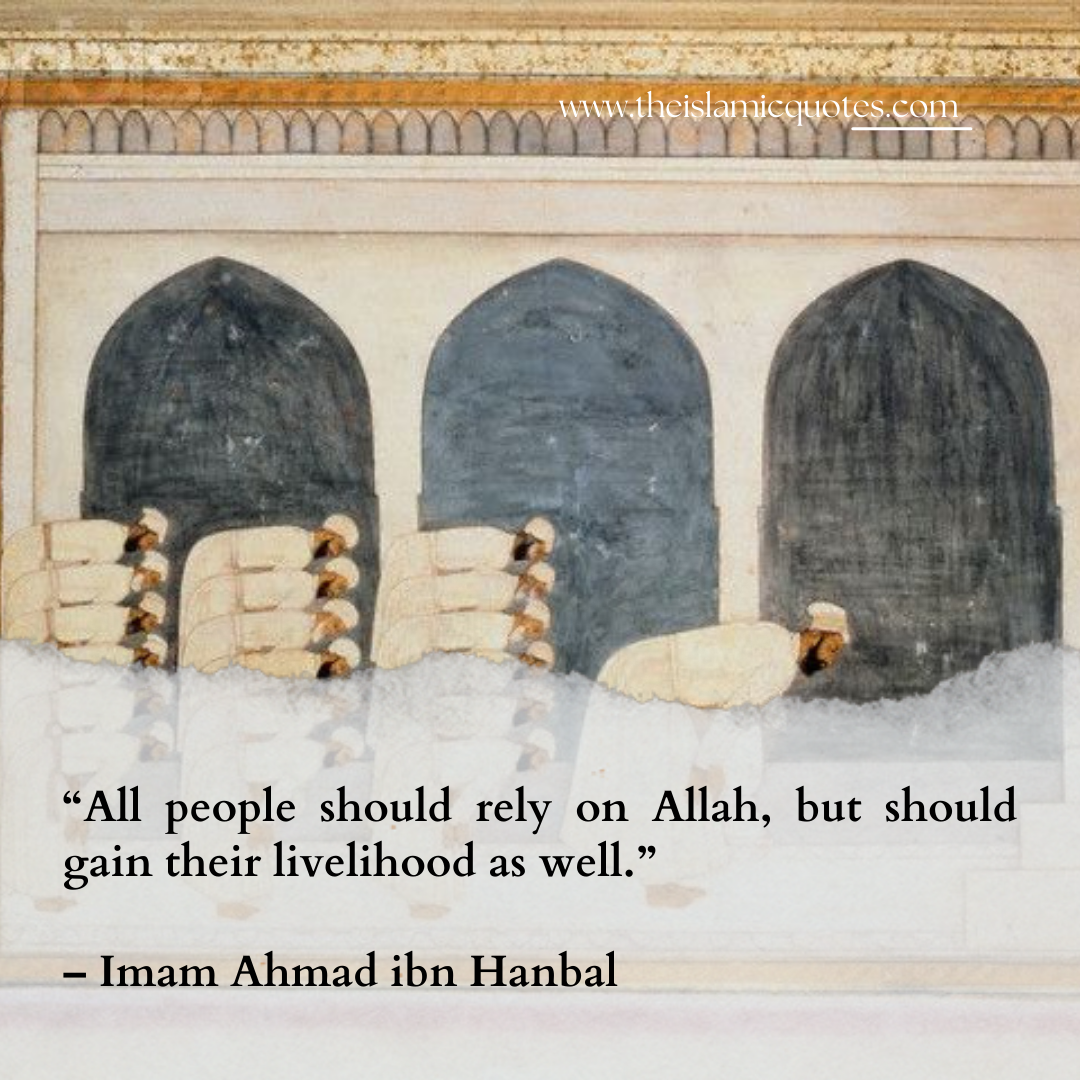 10. Recognize Your Real Worth

The wise man knows that he has to judge himself before the judgment of others. He knows that he is his own best critic, and he does not care what others think about him. He knows his real worth.

In the following quote, Imam Hanbal (May Allah have mercy on Him) also explains the importance of recognizing one’s real worth. 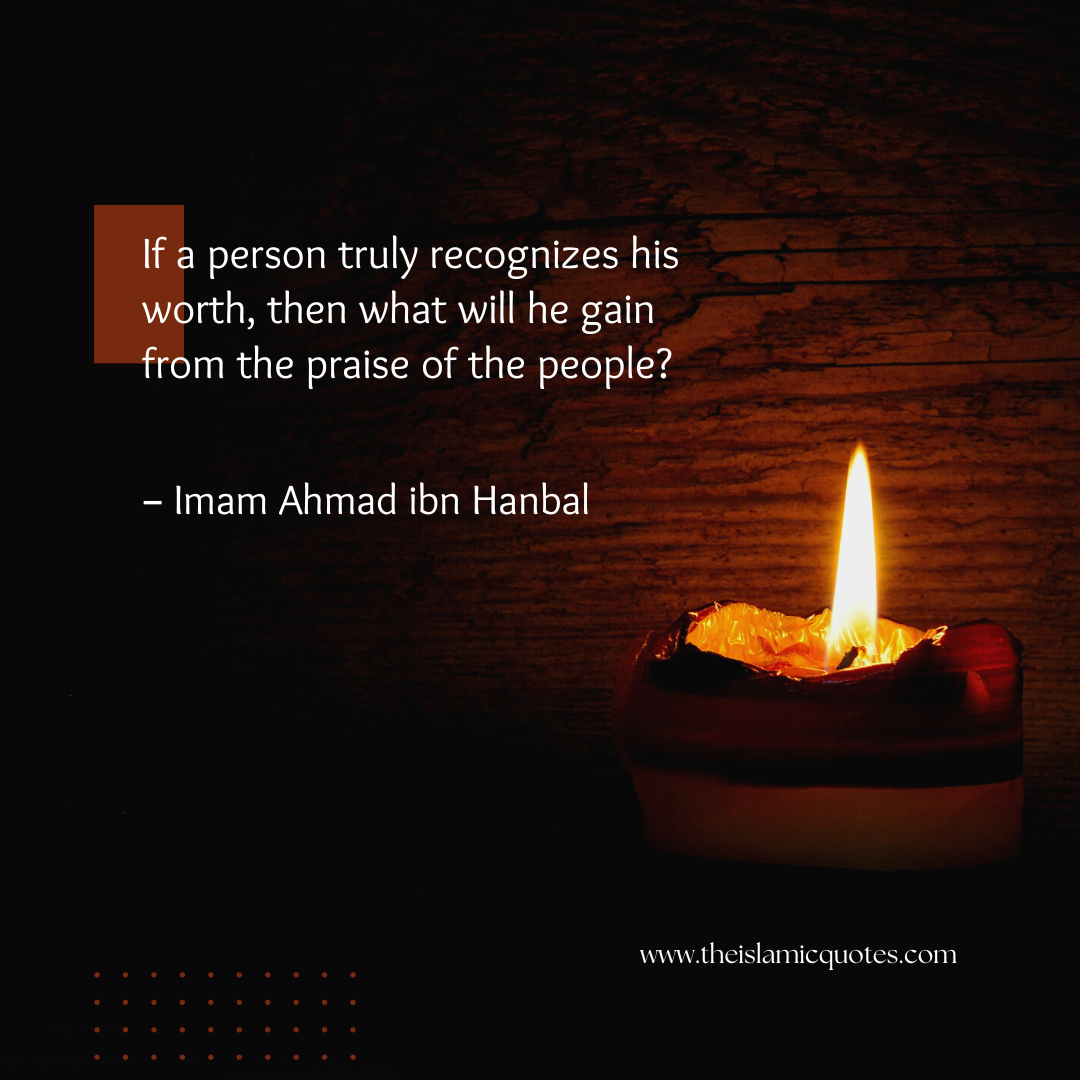 The philosophy of the man who is good touches a lot of people’s lives. The following quote tells us that having a positive attitude and being courteous to others is always good.

It also tells us that there are many ways one can make himself better with education, experience, and hard work. We should not focus on what we lack but on what we have instead. 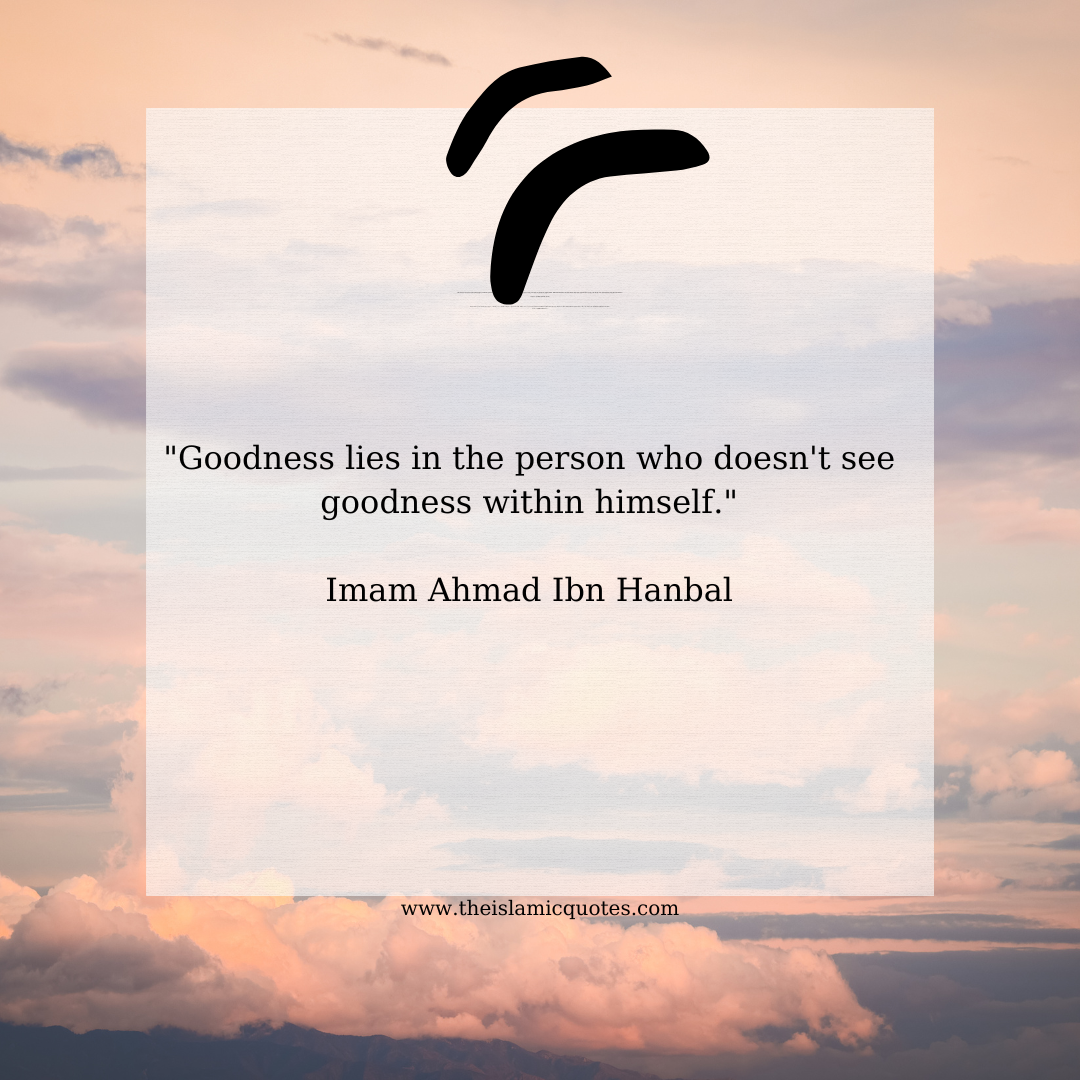 Love is a powerful thing that consumes every other emotion and feeling. It can be a beautiful force in our lives, but it should never be used to manipulate somebody or to get something in return. 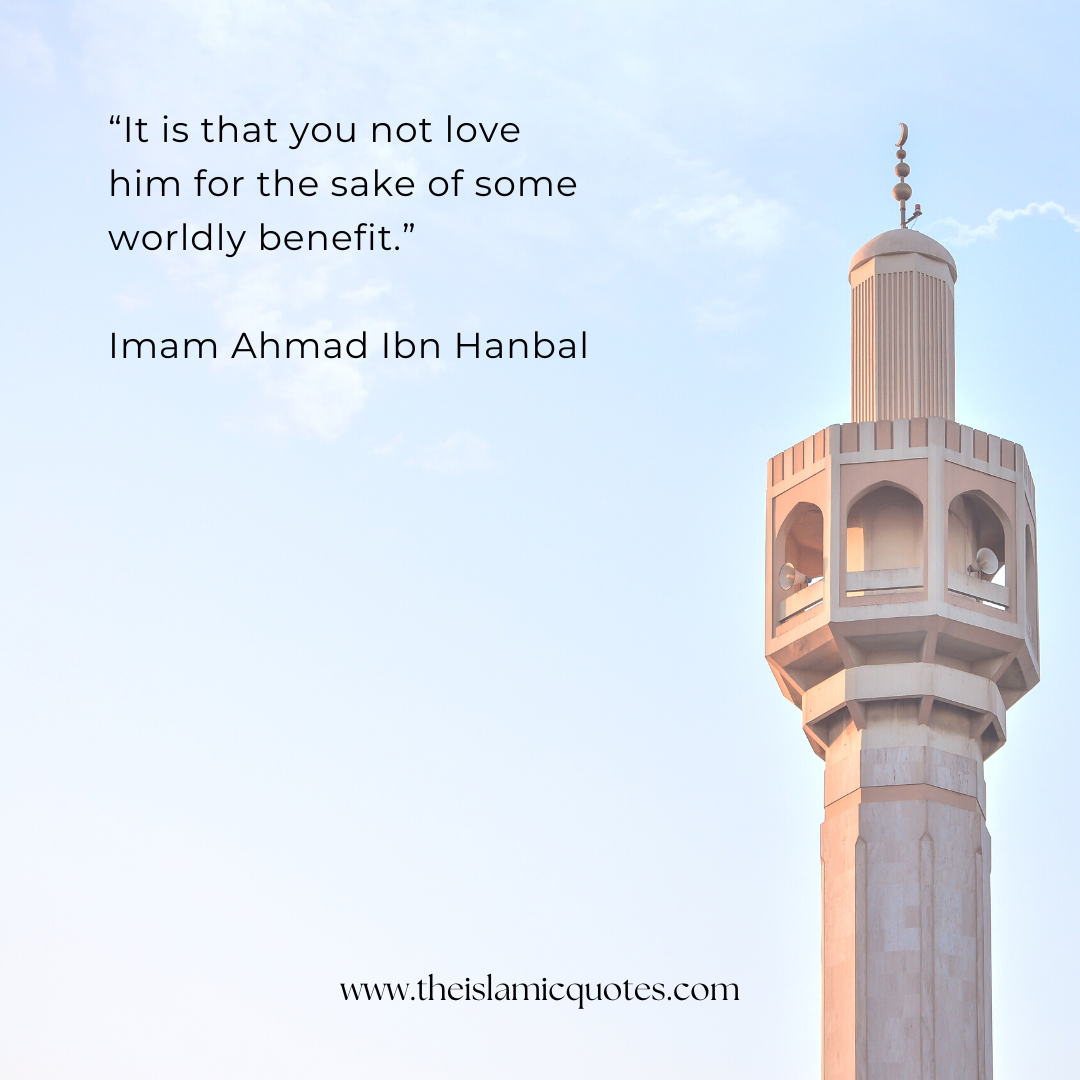 We have gathered the Imam Ahmad bin Hanbal quotes in Urdu after requests from some of our devoted readers:

The quotes of Ahmad Ibn Hanbal about life remain relevant no matter how much the world and technology have progressed. They are inspirational to Muslims and people of all faiths worldwide.

We hope that by reading this article, you will take away some lessons Imam Ahmad Ibn Hanbal has to offer. He is one of the most influential scholars who ever lived, and we consider it an honor to celebrate him and his work today.

Muslims should follow these 12 inspirational quotes by Imam Ahmad Ibn Hanbal to empower, motivate, and uplift one another. May Allah make us all benefit from them and keep us on the straight path.

Q. Exactly how many hadiths did Imam Ahmad learn?

According to Abu Zur’ah, Ibn Hanbal memorized 1 million hadith, 700,000 of which were relevant to jurisprudence.

Ahmad ibn Hanbal was a Muslim theologian, jurist, and martyr for his beliefs. He was born in Baghdad around 780 and passed away there in 855. He was the author of the Musnad, the collection of the traditions of the Prophet Muhammad, and the Hanbali, the most conventional of the four orthodox Islamic schools of law.

Generally adhering to the Hanbali school of thought, Saudi judges and government arbiters of public morals are called “Wahhabi,” a name signifying their scholastic reliance on Abd al-Wahhab.

A passionate writer by profession. By Allah's Grace, I aim to use my writing to acquire knowledge and convey it to others.