Fitting In As a Hijabi in the USA: Race. Color. Religion. Appearance. The world is full of diverse people, and each of them is judged by their appearance. But Why? As a young Muslim girl living in present-day America, my life was full of diversity.

I first started wearing Hijab in 7th Grade at Schuyler-Colfax Middle School. A public school. Yes, it was hard, it was tough. But that’s why I will always keep my head held high.

The term “Hijab“ means a separator, a curtain, or a screen. It is not the term used in Islam for women’s headcover. The women’s headcover term used in the Holy Quran is “Khimar”, which means in Arabic, a head covering or veil. But in the last twenty years, Muslims in the west and the media use the term “hijab” to define the headcover of Muslim women.

Hijab is worn by Muslim women in public all around the world not only in Arabic countries. Women cover their hair in all religions.

People may stare, people may whisper, but that’s what makes me stronger.

I had a best friend in 6th Grade and I told her that I was going to start wearing the Hijab the following year. The next year came, and she decided to start to ignore me. I took this as a test from Allah (SWT) and decided it was to move on. I became making different friends that accepted who I was, not what I looked like.

This goes to show that as a Muslim woman wearing the Hijab in America, I always get perceived the wrong way.

Fitting into society is hard for some, but why go through all that suffering when nobody is forcing you to. Why try and be like others, when you have yourself. This is what I ask myself when I see the others stare or when I see them whisper. Because if they really knew the truth, we would all fit in.

Why Is Hijab Important To Me?

Did you know that Sumaiya Karim, a 16-year-old girl, was the first person to speak from the House of Commons dispatch box in the British parliament while wearing the Hijab?

The world’s most famous woman to ever wear the Hijab was Miriam in Arabic (Virgin Mary) the mother of Jesus (PBUH).

Here are some well known Mulsim women with Hijab:

This just shows that Hijab cannot stop you or even prevent you in the least from your career opportunities.

World Hijab Day is an annual event that takes place on February 1st each year in 140 countries worldwide! Its purpose to encourage women of all religions and backgrounds to wear and experience the Hijab.

An annual event takes place on February 1st each year in 140 countries worldwide.

World Hijab day allows people to leave their comfort zone. It also allows them to feel and see what it is like to experience and see what wearing the Hijab is like. Some people claim it may be uncomfortable or even ugly. But you never know what it really feels like until you try.

World Hijab Day is for everybody and anybody that wants to participate or experience what Hijab feels like being in America. It gives you the true vision and experience because you are the one going about your day wearing the Hijab. You can feel and see how the people perceive you or look at you.

A. Chapter 1 in Quran, verse 256, God said: “There is no compulsion in the Religion”, this verse would answer both questions, God required wearing Hijab, five prayers, fasting, Ramadan. But no one can force anyone, but there are consequences for obeying or not. And that’s why not all Muslim women wear hijab, like how not all Muslims perform the five prayers or fast Ramadan, etc.

Q. Is it hot in the summer to wear Hijab?

A. When it’s hot, it’s hot for everyone, the Hijab can provide shelter from the sun. You can also choose thinner and breathable fabrics to wear hijab in hotter seasons.

Different races, colors, religions, it doesn’t matter. Because you never know if the person you judge by their appearances, could actually become your best friend. 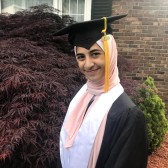